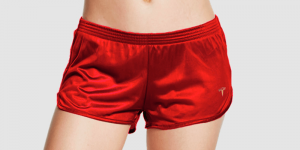 For years now, Tesla boss Elon Musk has been making fun of short-sellers speculating on short-term profits. Now Musk himself is becoming a “short seller” via the Tesla online shop, with Tesla Short Shorts (as in clothing) in Tesla red with the imprint S3XY.

At the time this article was written, the Tesla Short Shorts were already sold out, despite the joke price of $69.420 – which pokes fun at Musk’s infamous 420 tweet. The joke is Musk’s revenge on short sellers, who basically make money by betting on the price of a stock going down.

This must be particularly sweet for Tesla, since not only has it been so wildly successful that it brought down the website temporarily and almost immediately sold out of stock, Tesla shares are enjoying an all-time and generally unprecedented high, meaning that Tesla is currently trading on the stock exchange as the most valuable car manufacturer in the world.