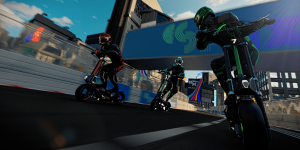 From 2021, a new and unprecedented racing series is set to cause a sensation: the eSkootr Championship. Racing drivers and other competitive athletes will compete on special courses in international cities with electric kick-scooters capable of speeds of up to 100 km/h.

While some racing enthusiasts set on powerful motors might think this is some kind of joke, the race is backed by two very prominent ambassadors: the former Formula 1 driver and two-time Le Mans winner Alex Wurz and Formula E driver Lucas di Grassi.

“I think you need to separate the concept of an extreme racing scooter from the e-scooters you see on city streets (today),” di Grassi says. “With this series, we have created a superfast race machine capable of speeds greater than 100km/h; that can accelerate faster than a road car, and which will reach 100km/h in only a few seconds. That’s the kind of machine we’ll be racing globally next year, and it will need to be ridden by professionals.”

Of course, the kick-scooters themselves will have to be specialised so they are capable of doing over 100kmh. But even then, the small vehicles make the race more affordable to all kinds of professional racers. Riders are expected to come from the ranks of racing drivers, cyclists, skateboarders, snowboarders, motorcyclists and e-sports racers.

“In creating the [eSkootr Championship], we wanted to celebrate the concept of mobilizing cities and liberating people who have been trapped within a transport system that no longer properly works,” says organiser Khalil Beschir, a Formula One broadcaster who will serve as CEO and COO, respectively. “By aligning that with a new category of motorsport – one that works for both participants and audience – we feel we can accelerate a collective conversation about mobility that will take us far into the future.” The idea is the brainchild of both Beschir and motorsport entrepreneur Hrag Sarkissian.

The benefit of small electric vehicles in the race means that it is more likely to be allowed to run in inner cities. Di Grassi articulately points out the benefits of this kind of race: “The usual rules for hosting a race no longer really apply. We can create tracks that exist outdoors or indoors – or a combination of the two – and they can be rigged and de-rigged within days, rather than the months it takes to ready a street circuit for an international road race.”

The event seems to express something that is happening in mobility and transport industries across the globe. Di Grassi says: “This climate of agility is important, too: We’ve moved into a society where change isn’t simply rapid; it’s constant. And this is a championship that can really move and flex with the current needs of people and places. It’s totally portable, it can race anywhere.”

Update 17 August 2020: Williams Advanced Engineering will develop the eSkootr model for the e-scooter racing series planned for next year, as the Electric Scooter Championship (eSC) has announced. The prototype reaches speeds of more than 100 km/h.