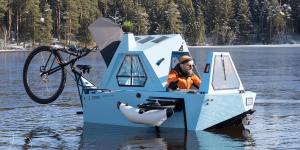 The startup Zeltini from Latvia has developed a motorhome amphibian for two people based on a three-wheeled e-bike called Z-Triton. The model can be ridden like a bicycle or launched like a boat. Apparently it sleeps two and a (small) dog.

With an electric motor for using on the water, this vehicle can open many paths that would be blocked otherwise, however it does not look like it can stand much of a storm, so lets not try to cross the Atlantic in this.
autoevolution.com, zeltini.com