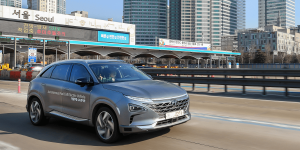 South Korea has extended the electric vehicle subsidies until 2025 as they increased the budget. The support scheme, which would have expired in 2022, also include buying premiums for buses and trucks with battery-electric and hybrid drives.

As the government in Seoul has now announced, the budget for subsidies for electric vehicles will increase by 4.5 trillion won – the equivalent of around 3.2 billion euros – as part of the extension, up from the previous 950 billion won earmarked for 2020. The subsidies for hydrogen vehicles will also be extended until 2025 for all vehicle types.

According to the subsidy rates valid for 2020, buyers of BEVs receive up to eight million Won (over 5,000 euros). The incentive to buy an FCEVs is 22.5 million Won (around 16,000 euros). It is unclear from the Korean reports whether these rates will be adjusted with the new budget.

Another change concerns the new government sales quota for low-emission vehicles: The rule introduced at the beginning of this year stipulated that car manufacturers must generate 15 per cent of this year’s sales with electric, hydrogen or hybrid vehicles. Now the government announces that companies that exceed their quota can sell their credits to other companies.

“We currently have 240,000 low-emission cars in the country. We plan to bring that number to 1.33 million by 2025,” said Environment Minister Cho Myung-rae. If the target is met, about one car in five on Korean roads would be a battery-electric or fuel cell car.

With the expanded subsidies and quota trading, the government not only wants to achieve its climate goals but also support the economy in the Corona as well as the climate crisis. The new billion-euro subsidy for mobility is only a small part of the entire package. This week, South Korea pledged a total of 160 trillion won, or around 133 billion euros, for digital and environmental projects as part of its new green deal over the next five years, also reported in our newsletter.

Local portal Pulsenews suggests the government expects the initiative to cut 13 million tons of greenhouse gas emissions, which would be about one-fifth of the country’s 2025 emissions target.