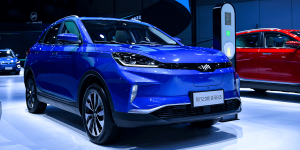 The Chinese electric car manufacturer WM Motor aka Weltmeister is apparently planning a rapid expansion of its model range. According to Chinese media reports, two new e-SUVs and one electric sedan are planned for the second half of 2020 and next year.

As Gasgoo writes, a six-seater SUV is to start in the third quarter of this year and will be followed in the first half of 2021 by another SUV and another electric sedan the same year. With these models, WM Motor is more than doubling its range of products.

The report does not reveal anything about the models’ drive technology or the possible common platforms of the three models. Instead, there is some information on autonomous driving and connectivity. The six-seater electric SUV, which is scheduled for launch this year, will allegedly have features such as face recognition and “visual activation.” At the same time Gasgoo itself refers to sources from local media, so the information should be treated with caution.

The SUV planned for 2021 should then have some “innovative applications” in autonomous driving and 5G. The electric sedan is said to have autonomous driving at level 3 and autonomous parking at level 4. A cw value of 0.23 and a range of up to 800 kilometres are being circulated for the sedan, but as is customary in China, these figures are calculated according to the somewhat unrealistic NEDC.

WM Motor currently has two production models on offer: The EX5 was launched in April 2018. At the beginning of July, the 30,000th unit is said to have been delivered, which puts the startup in second place behind Tesla Model 3 in terms of the number of sales. This was followed in November 2019 by the EX6, of which almost 900 units were registered in the first half of 2020.

In March last year, WM Motor raised 400 million euros with the financing round being led by Baidu, China’s equivalent of Google. In October 2018, the company was able to raise 288 million USD for both manufacture and R&D.