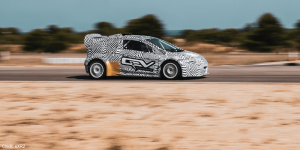 The ‘regular’ RX2 is a newcomer series in rallycross, i.e. short sprint races on mixed terrain. The RX2 uses standard racing cars – a concept that the FIA has now adopted for the electric racing series.

After QEV had won the umbrella organisation’s tender for the development of the eRX2 “arrive-and-drive” concept, which is based on a lightweight, four-wheel-drive electric rallycross vehicle with a spaceframe chassis, a power output of 250 kW and a 32 kWh battery, the last nine months have been devoted to preparation. The final car is to be officially presented towards the end of this year.

The plan is for the eRX2 cars will be able to run for up to 25 minutes, which is perfectly sufficient for sprint races. The cars are to be recharged between the individual runs, which will be held in a kind of tournament mode after a few preliminary runs.

“With short, sharp races, rallycross is the ideal discipline for electric cars, and we are confident eRX2 will generate more dynamic and spectacular action than has ever been seen before,” says Joan Orús, COO of QEV Technologies. “Not only will the degree of torque available make the car considerably quicker than the current RX2 model, but it will also be more challenging to drive, especially on the limit”. In the junior series, where young drivers prepare for the “supercar level” with the fastest rallycross cars, this is a “key factor”, says Orús.

Six European events are planned for the premiere season. Given the current uncertainties, the organisers do not intend to present the exact calendar until autumn.