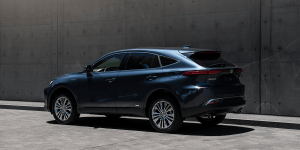 Toyota introduced the 2021 Venza for the US market, which is offered exclusively as a full-hybrid. The 2021 Venza is the United States-import version of the Japanese-market Toyota Harrier.

The midsize SUV combines a 2.5-litre four-cylinder petrol engine with three electric motors amounting to 219 hp or 163,3 kW. While reviews so far give the HEV top points on appearance, the full-hybrid (not plug-in) seems to be a half-hearted electric car, since the company doesn’t even give an all-electric range for the car or data for the car’s electric acceleration capabilities.

While Car and Driver praised the car’s aesthetics, the magazine also compares the Veza unfavourably with Toyota’s own RAV4, as the two crossovers share a platform and most of their powertrain and dimensions. The significant difference between the two is that the Venza has a lithium-ion battery pack while the RAV4’s has a nickel-metal hydride unit. Also notable is that the RAV4 is a plug-in hybrid while the Venza is a full hybrid. Accordingly, it must be noted that Venza’s battery holds far less energy, 0.9 kWh versus the RAV4’s 1.6. With this battery size, it is conceivable that Toyota does not mention the HEV’s purely electric range simply because it is remarkably small.

On this count, Business Insider noted that “in a recent Q&A session, Toyota’s engineers declined to disclose the range and speed limitations, if any. Rather, they said the main purpose of the all-electric driving is for coming home at night and not having the noise of the engine disturbing the neighbours,” which seems like a weirdly specific example to use.

Otherwise, the Venza is available in the USA for prices starting from $33,645 and go up to the top range for $40,975. Toyota mentions mod-cons such as the Stare Gaze fixed panoramic glass roof which can switch from frosted to clear with the switch of a button, AWD functions and a lot of interior tech and comforts.