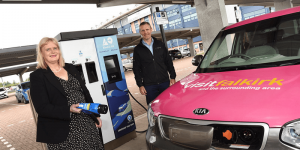 Compared to the second-largest charge park in Scotland, this new one features 30% more capacity. The £1.4 million self-service facility will generate some of its own power with a solar canopy of 1272 panels covering an area of over 2,000 m². The organisers estimate that this will save around 75 tonnes of CO2 annually. The generated energy will be kept available via three storage systems with a capacity of 201kWh.

Funding for the project was provided by Falkirk Council, the Scottish Government and the European Regional Development Fund through Transport Scotland’s Low Carbon Travel and Transport Challenge Fund. When opening the facility, Michael Matheson, Cabinet Secretary for Transport, Infrastructure and Connectivity, said: “This hub supports the Scottish Government’s bold ambition to phase out the need for new petrol and diesel cars and vans by 2032. The Low Carbon Vehicle Hub here in Falkirk marks the beginning of the Electric A9 which we continue to develop. The EA9 expands and builds further resilience into our existing ChargePlace Scotland infrastructure.”

The addition of the new charging stations brings the number of EV charging bays in Falkirk district to 68.