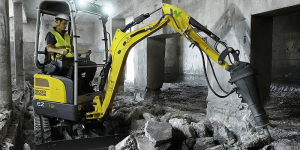 Wacker Neuson, a German firm based in Munich, is expanding its zero-emission range to include the EZ17e electric mini excavator. The manufacturer now offers 12 electric construction machines in this product series.

Thanks to its specially developed battery technology, the manufacturer promises flexible charging management and high performance. The other models in the zero-emissions series “can be operated completely free of exhaust emissions – without limitations in the sequence of operations or in performance,” says Wacker Neuson.

The EZ17e is designed to operate for a whole working day without intermediate charging. If stationary activities permit, it can also be operated by cable and charged while working on power sources ranging from 100 to 415 volts. The operator can monitor how much he loads the site’s power supply system via a display and disconnect the excavator from the grid if necessary. Charging at 415 volts should take around four hours, according to the manufacturer.

The battery also has its own heater to allow operation at low temperatures. Despite the power storage, the excavator is very compact and was designed as a zero-tail – i.e. without rear overhang.

“With the EZ17e, we have implemented a zero-tail concept with generous performance dimensions. With the efficient, intuitive and emission-free excavator, we satisfy the high standards of professionals who work in particularly confined space conditions, as is usual in interior demolition, for example,” says Stefan Bogner, Managing Director of Wacker Neuson Linz GmbH, the Wacker Neuson Group’s research and development competence centre for excavators.

By expanding the zero-emissions series, which started in 2015 with a battery-powered rammer, the manufacturer is preparing for increasingly strict regulations and requirements in terms of environmental and user protection, according to its own statements. One example is Switzerland: The procurement law that comes into force on 1 January 2021, stipulates that public funds must be used in an ecologically and socially sustainable manner which could have consequences for public construction projects and the construction machinery used in them.