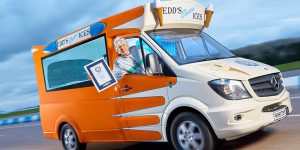 The Guinness Book of World Records has yet another curious entry. British tinkerer Edd China now holds the title for the world’s fastest electric ice cream van, with a measured top speed of 118.964 kph (73.921 mph), among six other records.

Yes, that’s right – Guinness World Records has confirmed as much online. The record-holding ice cream van is a Mercedes Sprinter converted from diesel to electric drive by Edd China himself. The work took him two years since it started in 2018.

Some of you may know the quirky self-made man from TV where he presented Wheeler Dealers on the Discovery Channel until 2017. He has also appeared on Top Gear. As a semi-pro television “star”, he’s made this video on his ice cream truck record.

While the project does bear a big “WHY” – Edd claims there is another spin on it other than racing for a record. He started off on “environmental importance” after discovering ice cream vans were being banned in some London boroughs because of their toxic emissions. So the fan of mechanics decided to create an engine conversion kit for ice cream vans so that they can run on electricity rather than diesel.

The inventor wants to roll this out globally, future-proofing ice cream vans so to speak – and indeed, cueing in no diesel fumes for your fill of a cone does seem like a great idea. We’d just like to note, that Mercedes has since rolled-out its own eSprinter which is also available in the UK.

This becomes Edd’s seventh Guinness World Record title all won with speedy motorised vehicles, including the fastest office, which he set back in 2006. It travelled at 140 km/h (87 mph) though not electric. Edd now has his sights set on breaking the record for the fastest motorized shopping trolley currently held at 70.4 mph. Edd aims to make it street-legal, using its new electric drivetrain to keep his record-breaking streak alive, according to the Guinness report.