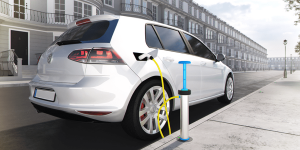 Startup company Trojan Energy is trialling electric vehicle chargers that are only visible when a car is charging. The Subsurface Technology for Electric Pathways (STEP) project will see 200 kerbside chargers installed across the London boroughs of Brent and Camden.

Rolled out through the Subsurface Technology for Electric Pathways (STEP) project, the partners have been awarded £3m in co-funding by Innovate UK. The charge points come through Trojan Energy, a company founded by engineers that moved on from the oil industry. They consider the technology a “flat and flush connection” meaning a charge point hidden from view.

Each charger consists of two parts – a charge point slotted into the ground, and a “lance” which drivers insert into the charge point to start to recharge. Charge rates run from 2kW to 22kW, and up to 18 chargers can run in parallel from one electricity network connection, according to Trojan Energy. They also claim the technology is V2G ready with EV drivers potentially able to plug-in and get a return on the energy they provide from their vehicle back to the grid.

Charging infrastructure built for those without their driveway or garage is crucial in densely populated London. Besides, solutions that clutter the streets as little as possible have been preferred by city officials, for example also in streetlamp charging solutions from Siemens and Ubitricity as well as other companies. These initiatives are mostly part of the Go Ultra Low City Scheme (GULCS) funded by the Office for Low Emission Vehicles. The project is aiming to deliver 1,150 charge points for electric vehicles across London boroughs by the end of 2020.

For the current project with Trojan Energy in the boroughs of Brent and Camden, the issue was no different: How to drive down air pollution and provide on-street charging solutions to increase EV uptake. Cllr Shama Tatler, lead member for regeneration, property and planning at London Borough of Brent, expressed the hope that “these discreet kerbside chargers will make electric vehicles accessible for more people and get us one step closer to our aim of becoming a zero-carbon borough”.

The STEP project sees the boroughs take on advice from Element Energy, a strategic energy consultancy who is leading the project. Celine Cluzel, Element Energy director, stresses that scalability as well as “research on consumer and wider street users’ preference – a typical gap in research so far,” are critical elements to the approach. Said research will be led by the Institute for Transport Studies at the University of Leeds. Feedback from this trial will inform commercialisation plans.

Other members of the consortium include UK Power Networks, Birmingham City Council and the University of Leeds. Renewable electricity supplier Octopus Energy will also be recruiting their customers for the trial and providing expertise in backend billing.