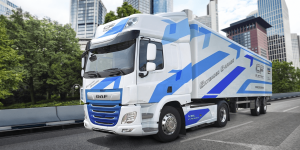 Dutch truck manufacturer DAF Trucks has doubled the range of its all-electric CF Electric truck to over 200 kilometres. Since the vehicle is significantly lighter with the new battery generation, the payload has also increased.

The introduction of a new battery generation also means a weight reduction of 700 kilograms that the manufacturer says is directly reflected in a higher payload. The CF Electric with extended range will be launched on the market this month and is expected to be delivered from early 2021. The electric motor will remain the same, as the drive still has an output of 210 kW and a maximum torque of 2,000 Nm.

The battery now has a gross capacity of 350 kWh, of which 315 kWh can be used. Previously the gross energy content was 170 kWh. According to DAF, the dimensions of the electricity storage unit have remained the same. The battery is also conditioned to remain within its optimal working window of 25 to 40 degrees, which supports the battery’s durability and constant performance level.

Assuming an appropriate charging station, the CF Electric should be able to cover over 500 kilometres per day. With 250 kW charging power, the complete charging process takes 75 minutes according to heavy transport manufacturer based in Eindhoven in the Netherlands. If the battery is charged during loading or unloading of the payload or during a driver’s break, the so-called daily driving distance should be possible. The CF Electric is not actually intended for long-distance traffic but is optimised for urban areas in logistics for supplying supermarkets or as a waste collection vehicle.