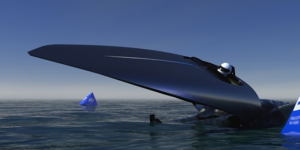 Alejandro Agag wants to establish a third racing series following the two electric car series Formula E and Extreme E, but this time with electrically powered racing boats. The series will be called E1 and does not yet have a starting date.

The plan is to have up to twelve electric motorboat teams competing in the E1 series. There will be races on lakes, rivers and off coasts in a single-seater electric racing boat called Racebird. The plans are currently a little limited by the fact that the Racebird only exists in the form of computer graphics. The British startup Seabird Technologies has yet to develop and build the electric motorboat.

Bureaucratically speaking, the creators have already taken several steps: Agag has been granted an exclusive license from the Union Internationale Motonautique (UIM) to be the first and only company to organise an electric racing boat championship. The UIM is the world umbrella organisation for motorised water sports. For the E1, Agag will initially rely on a concept familiar from Formula E, and Extreme E in that standard vehicles are to be branded and marketed by the teams.

The proposed racing boat should be able to reach speeds of up to 60 knots, which is around 111 kph. This is made possible by a unique hull concept whereby the carbon fibre hull lifts out of the water from a certain speed, at which point a U-shaped wing partly carries the boat. The foil reduces the frictional resistance of the hull enormously, which (in combination with the weight) should enable the ship to reach its maximum speed – the entire boat should weigh only 380 kilograms.

As in Formula E, energy management will play an essential role in the races by permitting only a certain amount of power tailored to the track. This should not only allow for advantageous driving skills and risk-taking but also in the effective use of energy. The races will be held in a knockout format.

A ship called the St. Helena will serve as a base during the E1 races. Agag has converted what was once a ship from the British Post Office. The St. Helena has a particularly low-CO2 output and will double as the primary expedition ship in the Extreme E off-road series. The Extreme E plans to carry out its first competitive race in Senegal in January 2021.

Rumours about the Extreme E were first heard in summer 2018, until confirmed in January 2019. If the race in Senegal takes place as planned, it will be exactly two years since the announcement. In Formula E, series founder Agag has meanwhile relinquished his chief position to devote himself to zero-emission racing projects such as Extreme E and E1.