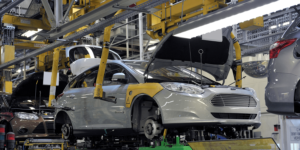 US carmaker Ford has just announced investments of 1.8 billion Canadian dollars in its plant in Oakville (Ontario) and Windsor’s two assembly plants. The investment will enable the Oakville plant to convert to electric car production by 2024.

The funding is part of an agreement with the Unifor trade union. The investment sum amounts to 1.8 billion CAD, which is equivalent to 1.15 billion euros. Currently, the company, the union and the employees have concluded the basic agreement but still need to work out the details.

Last week Unifor president Jerry Dias told CBC news that part of the agreement stipulates that Ford will produce five electric models at the plant. Work on converting the plant should begin in 2024. The first of these five electric vehicles should then roll off the line in 2025, and last of the five models should be ready for production by 2028. The union says they have also secured the assembly of batteries that will go into these vehicles.

For its part, Ford is careful not to make any statements about possible models at present. From the union side, Dias told reporters that it was a “big commitment of Ford Motor Company” that Oakville would be an important facility for Ford. Dias also spoke of a “decade-long commitment,” even though Ford has so far only announced a three-year agreement with its employees. That being said, the billion-euro investment in the plant would indeed indicate that Ford is interested in longer production there.

Despite the planned conversion of the plant, Ford has not committed itself exclusively to battery-electric cars in Canada and is also introducing a new engine program at the two Windsor plants.

The Oakville Assembly Plant opened in 1953 and was last modernised in 2013 at the cost of around 700 million CAD (450 million euros). More recently, the plant saw a decline in orders for some models. The Lincoln MKT and Ford Flex, two SUV models for the North American market, were discontinued in 2019. Currently, the Ford Edge (also for European export) and the large Lincoln Nautilus SUV are being built in Oakville.