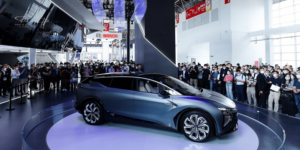 Chinese manufacturer Human Horizons presented its first electric SUV at Auto China. The HiPhi X is due to be launched in the first half of 2021 and will be available in small series production as early as the end of this year.

The all-electric “super SUV” as the company likes to call it, is available as a four- and six-seater at prices starting at 800,000 and 680,000 yuan, which is equivalent to around 100,000 and 85,000 euros respectively. The Shanghai-based company is still keeping technical data under wraps. In a press release issued on the occasion of the trade fair presentation, Human Horizons merely mentions features with which the model is intended to score particularly well.

Visually, the HiPhi X with its elongated body looks like a mixture of SUV and sedan, with the bulky front, high seating position and large wheels reflecting the typical SUV design language. The doors do not have any handles. Also, Human Horizons describes the vehicle as “touchless”, which could be interpreted to mean that the doors open and close without being touched by a sensor. While the SUV itself is based on a lightweight aluminum-steel construction, the materials inside the vehicle are intended to be particularly sustainable.

According to the manufacturer, the HiPhi X has a total of 562 sensors installed. In terms of networking and connectivity levels, the SUV is expected to set new standards, among other things with a fully automated parking function according to autonomy level 4, a 5G-V2X communication network, voice control and face recognition. To continuously update the systems, the company relies on over-the-air updates.

Human Horizons defines itself strongly through the smart car approach. To bolster their strengths in this area, the company announced a partnership with Microsoft in July 2020. The first AI application from this cooperation is currently also being presented at the Beijing fair in the form of an AI assistant called HiPhiGo. The tool was specifically designed to follow voice commands and “provide the driver with a truly interactive, modern AI,” the company says. HiPhiGo is a creative AI assistant – he can chat, write poems, paint a painting and edit videos. Sounds strange to us for now, but apparently there is a market for it in China.