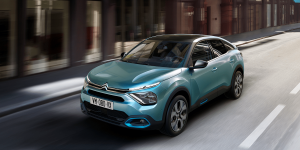 Citroën UK has opened its order books for the all-electric ë-C4. Prices and specifications have also been confirmed. The ë-C4 starts from £29,180 after the Plug-in Car Grant has been applied.

The battery-electric compact car built on the e-CMP platform featuring a 50 kWh battery will provide a range of 350 kilometres according to WLTP. In sport mode, acceleration from 0 to 100 km/h is achieved in 9.7 seconds, and the top speed is 150 kph in all driving modes. Charging on a CCS connection to 80% is completed in an impressive 30 minutes, while the three-phase 11 kW charger takes about five hours. The included  7.4 kW charger allows home charging to a 100% charge in seven hours and 30 minutes.

They will be available in three trim formats: ‘Sense Plus’, ‘Shine’ and ‘Shine Plus’. All three trims feature the same battery and range and distinguish themselves by interior trims and improved safety features and driver-assist. However, one wonders whether the ‘fuel pricing’ service will translate to a charging map on the electric version compared to the petrol and diesel variants.

Citroën has officially launched the ë-C4 in the UK. The commercial launch coincides with deliveries of vehicles to dealerships. The ë-C4 starts from £29,180 after the Plug-in Car Grant has been applied. To help deal with Covid restrictions, vehicles were delivered to dealerships, which are enabling customers to ‘Click and Collect’, “where regulations allow or arrange home delivery, where available”.

A year after introducing the all-electric ë-C4 in the UK, Citroën delivers an upgrade for the 2022 model year effective from October 2021 production. The company stresses increased driving efficiency to enhance the real-world range without specifying further. At the same time, the certified WLTP range of 217 miles remains unchanged, and the battery continues to hold 50 KWh.

Further changes to the specification include a new alloy wheel design and body colours.

Since launching in the UK, Citroën says the ë-C4 Electric has accounted for over a fifth of total new C4 orders.

The Citroën ë-C4 Electric costs £30,895 in the entry-level trim, including the PiCG.

Citroën UK has revised its ë-C4 line-up for 2022 with a new entry-level ‘Sense’ version. Prices for the ‘Sense’ version start at £29,995. As it is eligible for the adjusted Plug-in Car Grant (PiCG), this results in an OTR price of just £28,495 after grant is applied. There are also the higher-priced  ‘Shine Edition’ and ‘Shine Plus’ models, while the ‘Sense Plus’ trim is no longer being offered.

Top of the range prices start at £34,995.00 for the ‘Shine Plus’, which does not qualify for the updated plug-in car grant, while the other two models do.