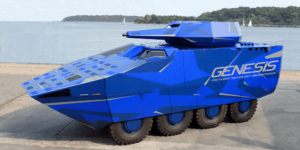 Bring the kids to school safely: The German armament manufacturer Flensburger Fahrzeugbau (FFG) has just presented the Genesis, the prototype of a hybrid electric tank that can travel 150 kilometres using electric power.

The Genesis is the first 8×8 Armoured Fighting Vehicle with a full hybrid drive. Not only will you get your kids to school safely with less emissions, but you’ll also be the first person on the block to have one.

You won’t be lacking in power, the propulsion of the former is diesel-electric and has a total installed power of 1,368 kW. With all that power, it’s mostly electric with the diesel generator only used to generate electricity for the battery, which is also located in the front part of the vehicle, leaving plenty of room for the kid’s school bags or your sports gear.

In all seriousness, electric drives are advantageous for military situations because of the lack of noise, meaning better stealth. The diesel-electric drive enables noiseless driving or operation of the observation and communication devices with the engine switched off (Silent Watch). The company says iterates that the ventilation system, which is only necessary at certain temperatures, and the driving noise of the tires are the only sources of noise, and even these are significantly lower than those of conventional drives. Other advantages include the fact that the electric motor has a high tracking capability because, unlike the internal combustion engine, it has full torque even when stationary. Not just for fighting: These electric vehicles can also serve as “electricity filling stations”.