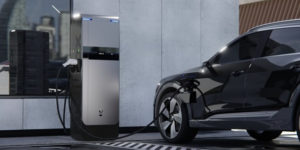 Wallbox expects production to start in the second quarter of 2021 and sales will begin first in Europe, followed by North America and other countries. With Supernova, the company is adding hardware for public charging to its product range for the first time. Until now, Wallbox has concentrated on private and semi-public charging with its chargers.

Regarding the design of the new station, the manufacturer speaks of nine independent modules that work together inside the column. Several modules come from Wallbox’ bidirectional charger Quasar. The modular design facilitates installation, maintenance and transport, according to Wallbox. “Supernova is our answer to the growing needs of EV users and the cities they live in,” said Eduard Castañeda,  co-founder and Chief Product Officer of Wallbox.”

“We have applied the same development concepts and fundamentals as we did with the Quasar, the world’s lightest, smallest and most efficient bi-directional charger. The result is a charger that is exponentially more stable and efficient, easier to install and maintain,” added the executive.

The Spanish company has yet to specify pricing but said the Supernova would have “half the cost” of comparable chargers. Parallel to the market launch, the company wants to push the development of further chargers for public use such as a 150 kW charger for intercity day trips and a 250 kW product for longer distances.

Wallbox’ orientation towards public charging had already been indicated when last month they took over the digital platform Electromaps. The app from Electromaps enables around 100,000 users to access and pay at 120,000 charging points in Southern Europe by phone.

Wallbox has been in existence since 2015 and is headquartered in Barcelona with more than 250 employees in offices in Europe, Asia and America and two factories. It was only at the beginning of the year that the Spanish completed the second tranche of their Series A financing round, bringing them 23 million euros. The funds are primarily intended to accelerate expansion into China and the USA. The manufacturer currently sells its chargers in more than 40 countries.