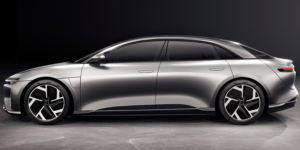 Lucid Motors has now revealed the details of the basic version of its Air electric sedan set to come out in 2022, after the higher-priced versions. The basic model will cost $77,400 in the USA (or $69,900 after the federal tax credit of $7,500).

Reservations are open with immediate effect for a $300-fee. The single-drive propulsion system produces 353 kW, the estimated EPA range is 406 miles (653 kilometres). Lucid says that an all-wheel-drive configuration with two motors is optionally available for the basic model.

Lucid presented the production version of the Air in September, but only mentioned the performance data of the higher-value versions at the time. The maximum range is 517 miles or 832 kilometres for the 588 kW Grand Touring version of the Air. The maximum power of 794 kW is offered by the Dream Edition, whereby the range is somewhat lower at 503 miles (809 kilometres). The Lucid Air Tour with 456 kW and 653 kilometres EPA range is among the two top models.

Like the higher-priced variants, the basic model also has a battery with 900 volts system voltage. The largest battery installed in the Grand Touring and Dream Edition has 113 kWh. At the premiere, the company did not provide any information on the smaller battery of the other two versions. Similarly, no energy content is mentioned in the current press release regarding the basic version. It is also unclear how high the maximum charging capacity will be for the small battery – the large battery is expected to have up to 300 kW.

Instead, Lucid Motors emphasises the advantages of the Air’s bodywork. With the outer dimensions of a mid-size car, the very compact drive is supposed to offer the interior of a luxury car, according to the manufacturer. The bodywork should enable aerodynamic efficiency, increased agility and manoeuvrability says the company.

“Our vision from the beginning – what drives this company – is creating the world’s best EV technology while making it progressively more attainable over time,” says Peter Rawlinson, CEO and CTO of Lucid Motors. “With the starting price of the Lucid Air range announced today, we are setting the stage for broader adoption of the latest, game-changing EV technology”.

Although customers can already reserve the basic model, called Lucid Air, one important date has not yet been disclosed: the start of delivery. The higher-priced versions are scheduled to come onto the market in spring 2021. The company has not yet announced when exactly production of the basic model will start at its own plant in Casa Grande, Arizona, and when the vehicle will be delivered.

Prices out for regular VW ID.3 electric cars in the UK