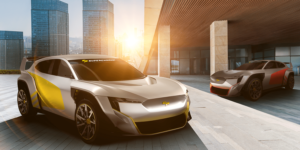 SuperCharge is the name of a new international racing series based on all-electric crossover road vehicles and has now announced its plans for the first time. After the anticipated start in 2022, the races are to take place in major international cities.

According to its own statements, the series is planning eight events to be held in the Asia-Pacific region, China, Europe, the Middle East and the USA. The supercharge races will be driven by a vehicle that is currently being developed under the code name SC01. The crossover racing car is to have an electric motor on the front and rear axle, each with an output of up to 500 kW, which will accelerate the electric motor from 0 to 100 km/h in 2.5 seconds.

The makers of the series are primarily targeting manufacturers, not necessarily private racing teams. Using the unified technology of the SC01, each manufacturer should be able to put on a silhouette so that the design of the racing cars is reminiscent of the body of a road vehicle. But the communication also states that the “development of battery technology” could improve the battery performance of roadworthy EVs. So manufacturers can use their own batteries, but the rest of the vehicle will be unified. In Formula E, the development of some drive components is also free, but the battery is a unitary component. To emphasize the relevance to series production, the vehicles are to be charged using conventional rapid charging systems.

It is important to emphasize that these should be crossover racing cars. The relatively short tracks are only supposed to be around one kilometre long and were designed to provide a “high-quality, action-packed entertainment experience. In principle, the ‘SuperTracks’ are to take place in a kind of amphitheatre with surrounding grandstands, which can, however, be adapted to the event locations (“parks, road sections or existing race tracks”).

Each route is to be given four elements: A 2.5-meter high ramp, over which the vehicles are to jump up to ten meters, a particularly slippery, low-friction zone, an irrigated area and a “SuperLoop”. The driver has to go through this extension once during the race over six laps – similar to rallycross. In a KO format, 16 cars from eight teams are to compete against each other.

The supercharge has nothing in common with the existing or announced electric racing series Formula E and Extreme E, both of which can be traced back to Alejandro Agag. “Racing is at a crossroads,” says Rob Armstrong, SuperCharge Managing Director and founding member. “Alejandro Agag and Jean Todt [FIA President] have done an excellent job as pioneers of electric racing. As many countries and cities have already announced their intention to ban cars with combustion engines in the coming years, the need for electric racing with road vehicles is becoming more and more urgent. We are convinced that it is only a matter of time before there are more electric racing series”.

Riversimple to make fuel cell vehicles in Wales by 2023