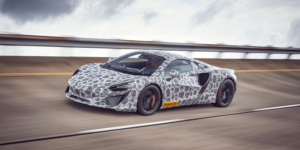 The British sports car manufacturer McLaren has delivered an update to the first production model with hybrid drive. The still nameless hybrid super sports car has entered the final phase of its development and test programs, which include driving on public roads.

The hybrid runabout is scheduled to be launched in the first half of 2021 and, according to the manufacturer, “as well as providing medium-range EV-only drive capability”. McLaren has not yet provided any figures on the drive. So far, the only confirmed information available is that the car is also to have a pure EV driving mode.

The electric motor with unknown performance will be combined with a new V6 gasoline engine. So far, all models of the British sports car manufacturer since its comeback with the MP4-12C in 2011 have been based on a 3.8-liter V8 turbo gasoline engine, which was expanded to four liters in later versions.

The “hybrid super car” is to be placed between the 720S and GT internal combustion models in McLaren’s model range. This will also provide an order of magnitude for the hybrid sports car’s system performance: the 720S, which has been built since 2017, will produce 530 kW (or the eponymous 720 HP). As a more comfortable Grand Tourer, the GT gets “only” 456 kW from the same 4.0-liter V8, however. The McLaren GT starts at prices starting at 198,000 Euros, the 720S costs at least 273,000 Euros.


McLaren has already offered two models with hybrid drive since 2011, but each of these were strictly limited top models: only 375 units of the McLaren P1, built between 2013 and 2015 with a 132 kW electric motor, have been built, and the McLaren Speedtail is built only 106 times, similar to the McLaren F1 from the 1990s. The still nameless sports car is set to become the first hybrid model to be sold in the regular range outside the limited special models.

In the memo, the company merely writes of a “high-performance hybrid powertrain” which, together with “race-honed agility ensure trademark McLaren track performance”. The super sports car will be built on a new carbon fiber structure, which the company calls McLaren Carbon Lightweight Architecture (MCLA).

The first series-produced hybrid sports cars will soon be followed by other models: As early as 2018, McLaren had announced its ‘Track25’ corporate strategy, according to which all models are to be sold as hybrids by 2025. This plan for the future is also behind another announcement from the press release: Production of the model series called ‘Sport Series’ will end in late 2020 with the limited 620R – without a hybrid.

Mini portfolio to be fully electrified by 2024