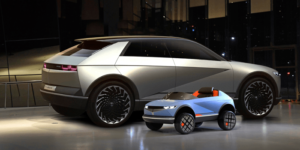 Hyundai offered the first glimpse of its smallest electric car to date: the mini electric car for children is inspired by the concept car 45 that Hyundai presented at the IAA 2019 and is designed to reach a top speed of 7 km/h.

While the company has not released many specs beyond the two DC motors included and top speed, the range remains unclear. However, the manufacturer adds: “driver’s laughter is believed to fuel the vehicle to travel further”. While we won’t see the mini-EV on any public roads soon, more is to be revealed soon. In the meantime, Hyundai also provided a production & design video: