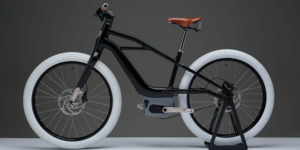 Harley-Davidson has announced that it is entering the electric bicycle market with a new brand. The first product line of the new company Serial 1 Cycle Company will be launched in spring 2021, also in Europe.

While the company is not a wholly-owned subsidiary of Harley-Davidson, the motorcycle brand was involved in the founding. According to Serial 1’s announcement, the electric bicycle project was born “as a secret project” at Harley-Davidson’s product development centre. A small group worked on designing and developing a pedelec “worthy of the Harley-Davidson name”.

Even before the pandemic, the electric bicycle market was booming. Now with health concerns and governments keen to decongest cities, that growth is catapulting the micromobility market into another league. Last month we reported that the Dutch electric bike startup VanMoof raised another 34 million euros from investors meant to support VanMoof’s global expansion. This comes only a few months after a 12.5 million euro investment in May. This electric and pedal-powered bike boom has not gone unnoticed by Harley Davidson. In their press release sent by email, the US motorcycle manufacturer said that global electric bicycle market was estimated to be over $15 billion in 2019. They say that this rapidly growing market is projected to grow at an annual rate of over 6 per cent between 2020 and 2025.

Harley-Davidson had presented the designs of three e-bikes in the summer of 2019, one of which is very similar to the e-bike that Serial 1 is now presenting. On the frame of the Serial 1 bike you can now still see the lettering “Powered by Harley-Davidson”.

Later it was decided to restructure the e-bike business into a new unit while keeping proximity to Harley-Davidson. Some of the members of the development group subsequently switched to Serial 1. With Jason Huntsman (President), Ben Lund (Vice President and Product Development), Aaron Frank (Brand Director) and Hannah Altenburg (Marketing), many Serial 1 executives have experience at Harley-Davidson.

Also underlying the close connection between the electric motocycle parent company and the electric bicycle prodigen, the name of the Serial 1 Cycle Company comes from ‘Serial Number One’ – the nickname of the oldest Harley-Davidson motorcycle. “When Harley-Davidson first put power to two wheels in 1903, it changed how the world moved, forever,” says Frank. “Inspired by the entrepreneurial vision of Harley-Davidson’s founders, we hope to once again change how cyclists and the cycling-curious move around their world with a Serial 1 eBicycle.”