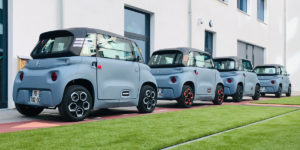 Citroën UK has launched a website for UK customers to gauge interest in potential plans to sell the Ami small electric city car in the UK.

While the small electric vehicle has already found a use for adaption by the Moroccan postal service, PSA is still undecided on whether to set up a variant for the British market. Under the headline “WE WANT TO BRING AMI 100% ËLECTRIC TO THE UK! BUT FIRST, WE NEED TO KNOW IF YOU’RE INTERESTED!” the manufacturer lists registration options “for follow-up”, but does not require any guarantee of interest.

This is likely due to the cost of the vehicle – at 6,000 euros in its home market, France, the battery-electric car is built with a ‘less is more’ mindset. We tested the vehicle on a ride around Berlin and found it good for big city use. The Ami offers space for two passengers, and a 45 kph top speed, alongside a range up to 75 km of thanks to a 5.5 kWh battery. Charging can be done via simple external sockets for 1.8 kW. An adapter for type 2 charging stations and wall box chargers are also technically possible but seem a bit overkill. It takes three hours to fully charge the little energy pack, one way or another.

Another feature of the vehicle is that the Ami is classified as a quadricycle rather than a car. In Europe, that means it does not require a driving licence and can be driven by 16-year-olds. However, this regulation only applies to continental Europe, as the UK uses a weight limit in its ruling on the subject. Persons aged 16 are eligible to drive light quadricycles up to 350kg (after the CBT, theory test and practical test), but since the Ami weighs 485kg, this would not apply in the UK.

While the technical aspects aren’t particularly impressive, the vehicle wasn’t designed to be a race car and the focus was instead placed on the vehicle’s footprint – both in terms of space and energy use. Needless to say, it’s emission-free. Whether this kind of practicability is attractive enough for UK’s largest cities like London, Birmingham or Manchester remains to be seen. Interested parties will have to wait and see the interest gauged by the French manufacturer.

Volkswagen sets aside €35 billion for e-mobility