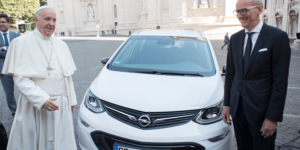 The Pope has been seen in electric vehicles for some time. Now, his court, the Vatican will follow the example and switch all service vehicles to electric. Distances in Vatican City State were short enough, expressed officials.

In an interview with L’Osservatore Romano shared by Crux, Roberto Mignucci, director of workshops and equipment for the office governing Vatican City State, said that a fleet of electric vehicles would be “perfect”. The average annual mileage for their vehicles was less than 6,000 km or 4,000 miles, explained Mignucci. Vatican City measures a mere 109 acres.

The director did not say when the Vatican would complete the transition. He mentioned an expansion of charging infrastructure to include other extraterritorial properties surrounding the basilicas of St. Mary Major, St. John Lateran and St. Paul outside the walls. So far, only members of the Vatican can use the services.

Mignucci did not disclose any specific vehicles either but pointed to higher albeit worldly powers. “Soon, we will start collaborating with automobile manufacturers who can provide electric vehicles for evaluation.”

It would not be the first time for carmakers to come forward, although usually for the more prominent Papa Mobil. The latest version is the hydrogen-powered popemobile based on a modified Toyota Mirai.

Electrifying the fleet now, would be the latest move in a series of initiatives meant to reduce the Vatican’s impact on the environment. The initiative follows guidelines set by Pope Francis’ encyclical on environmental conservation, ‘Laudato Si’ with the subtitle “On Care For Our Common Home”. When published in 2017, then still Opel-boss Karl-Thomas Neumann had risen to the occasion and presented the Pope with an Ampera-e. It remains unknown what has happened to the electric Opel.