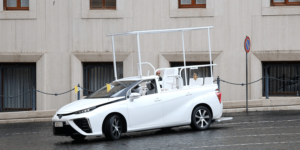 The Pope will be using hydrogen in the future thus leaving only water in his wake when parting the crowds. Pope Francis has now received a Toyota Mirai converted to the newest iteration of the iconic Popemobile.

As Rome plans to go emissions-free in order to preserve their city and environment, the head of the Vatican is following suit. Toyota also pointed to the pope’s statements regarding environmentalism, which they think are well reflected with the Mirai drive: “This is his appeal to safeguard the earth and all that surrounds us, changing our lifestyle to preserve our ‘common home’.”
carscoops.com, toyota.co.uk