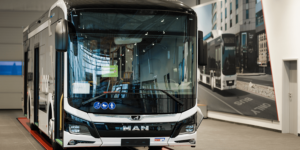 At MAN’s Polish plant in Starachowice, series production of battery-powered city buses has got off to a successful start. The Lion’s City E will initially be produced in the 12-meter solo version.

The first customer vehicles are now rolling off the production line for the Hamburg Holstein public transport company (VHH), Germany. The articulated Lion’s City E will follow about six months later and is scheduled to go into series production in the first half of 2021.

MAN presented the series version of the Lion’s City Electric at Busworld in Brussels in October 2019. The 12-metre bus has 35 seats and can carry up to 88 passengers. The drive train delivers 160 kW to a maximum of 270 kW. MAN estimates the range at 200 to 270 kilometres from the modular batteries with 480 kWh installed capacity. Charging happens via CCS2 combo plugs at the depot.

While German auto manufacturers have largely slept through the surge in demand for electric buses globally, MAN Truck & Bus, owned by Volkswagen Group appears to be getting going in Poland, now alongside the Netherlands as the largest electric bus producing country in Europe. The MAN site in Starachowice is the company’s competence centre for the production of low-floor city buses and bus chassis. MAN says that it is pushing ahead with the modernisation of its business premises in preparing the production site and its employees for e-mobility.

Now that the company has completed a comprehensive trial and testing programme illustrated in the video below, the MAN electric bus is ready for series production, which the company says, in fact, began in last month.

At the end of 2019, the first two vehicles were handed over for everyday use in Hamburg and the MAN eBus demo fleet has been negotiating extensive field trials in scheduled service operation in Germany, Spain, Belgium, the Netherlands and France.

“I am delighted that we are now able to supply the innovative and multi-award-winning Lion’s City E as a series-produced vehicle. The start of series production is an important milestone on the e-mobility roadmap for MAN Truck & Bus and for the site in Starachowice. In doing so, we are expanding our production portfolio and taking another strategic step towards sustainable mobility,” says Michael Kobriger, Executive Board Member for Production & Logistics at MAN Truck & Bus and Board Mentor for the Business Unit Bus.

As is now increasingly the case, manufacturers or long-distance and heavy-duty vehicles are also looking at hydrogen fuel cell systems. MAN has only just got started on this front and last month announced that they would be focussing on H2 trucks. As yet, the company has not mentioned hydrogen fuel cell buses, which are similarly enjoying increased focus.

MAN will be handing over 17 new electric buses to the Hamburg-Holstein public transportation company (VHH) by the end of the year. The order was announced at the end of last year. For MAN, this is the first major delivery to a customer off the back of a tender process.