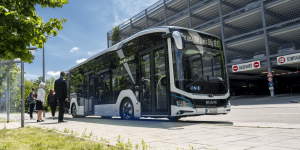 In Germany, the Hamburg-Holstein Transport Authority (VHH) has ordered 17 MAN Lion’s City E buses. MAN Truck & Bus has thus won one of two lots put out to tender. For the manufacturer, it is the first major delivery of electric buses to customers within the framework of a tender. But the decision comes as no surprise.

According to MAN, the delivery of the vehicles is to start in the second half of 2020. By the end of next year, all 17 buses in the VHH design are to be delivered to the public transport companies in Hamburg. As early as the end of December, the VHH will receive their first MAN electric bus, with which they can gain initial experience in everyday use.

The manufacturer is delighted with the premiere order. “We’re very happy about the order because for us, it’s the first large customer delivery of electric buses as part of a tender. It’s therefore a significant milestone on the e-mobility roadmap,” says Rudi Kuchta, Head of Product & Sales Bus and spokesman for the Bus Division at MAN Truck & Bus. “In doing so, VHH is relying on our e-mobility competency even before the start-up of the first MAN field trial vehicle. We’ll do everything we can to live up to this trust.”

MAN presented the Lion’s City E for the first time as a prototype at the IAA for commercial vehicles in September 2018. At this year’s Busworld in October, the series version was shown and also offered for test drives.

It had already become apparent that VHH, as the first customer, had opted for the new model instead of a proven electric bus from another manufacturer: Hamburg has been associated with the VW Group for years in a “strategic mobility partnership”. The partners have been working together on various projects since 2016. The results of the cooperation between MAN and the public transport operators Hamburger Hochbahn and VHH had “been directly incorporated into the development of the new all-electric MAN Lion’s City E city bus”. At least this is how the VW Group described it when the mobility partnership was extended in November. Already at that time it was mentioned that “the first MAN Lion’s City E should complement the bus fleet of the municipal companies in everyday use”.

The twelve-meter-long Solobus is equipped with 35 seats, with standing room the bus has a capacity of 88 passengers. The drive train in the Lion’s City E has an output of 160 kW to a maximum of 240 kW, the range is estimated by MAN at 200 to 270 kilometres – the first value is “reliably” achievable, the second “under favourable conditions”. The battery has an energy content of an impressive 480 kWh. According to MAN’s own information, it has used “the mature battery cell technology from the Group’s modular system” for this purpose.

In some respects, the electric version differs from the design of the combustion models – partly for technical reasons, partly to demonstrate its independence. One of the most striking differences is that the elimination of the engine tower and the placement of the batteries on the vehicle roof creates four additional seats at the rear.

Update 22.12.2019: Ten days after the announcement, MAN has already handed over the first two electric buses to the public transport operators Hamburger Hochbahn and the Hamburg-Holstein public transport company. They now operate the electric buses in daily service. In the coming year, MAN plans to hand over a further 13 Lion’s City E to customers for test purposes. According to the company, the demo fleet will be on the road in five European countries. The first customer vehicles from series production are then to be delivered in the second half of 2020; these are the 12-meter solo buses. The articulated bus version is to follow at the beginning of 2021.