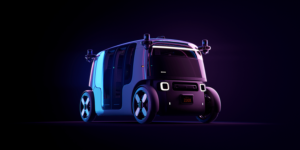 The Californian startup Zoox, acquired by Amazon in June 2020, has just revealed a preview of its first Robotaxi. It is, of course, purely electric and is designed for fully autonomous driving, doing without either a steering wheel or driver’s cockpit.

The 3.63-meter-long vehicle consists of a passenger compartment with room for four people, although the seats can also be removed for use as an autonomous delivery vehicle. The shuttle perceives its surroundings via cameras, radar and six lidar sensors on the roof. A large battery with a capacity of 133 kWh promises 16 hours of continuous operation per charge. For an autonomous vehicle, the e-shuttle can travel quite fast at 120 km/h. However, Zoox Robotaxi is made for urban environments. With all-wheel drive and steerable axles, the Robotaxi can turn almost on the spot and can drive backwards as well as forwards.

In the Zoox Robotaxi, four passengers fit on two benches opposite each other. Their seats are equipped with touchscreens sometimes to display the route to be taken. The safety features of the vehicle’s seats and airbags are designed for its bidirectional driving capacity. Zoox describes seats that “wrap around” passengers and a new type of airbag system. Currently, the company is completing tests with the e-shuttle in Las Vegas, San Francisco and at its headquarters in Silicon Valley, where the Amazon subsidiary is also considering building-up an autonomous cab service.

Amazon bought Zoox in June this year for $1.3 billion as the startup was flagging in the wake of the Corona pandemic. The developer has been involved with the model since its inception six years ago and holds quite a few patents. The acquisition is one of several forays made by the online giant into the mobility and automotive sectors. Amazon is also one of Rivian’s most prominent investors, and in 2019 got in on Aurora Automotive, the developer of self-driving car technologies that acquired Uber’s self-driving division.

Self-driving e-pods and e-shuttles are currently being developed by established automotive OEMs as well as IT groups and startups. Some examples are Local Motors with the e-shuttle bus Olli, the “ICT for electromobility” project Hub Chain, National Electric Vehicle Sweden (NEVS) with the PONS, DroidDrive with the Ducktrain or GM offshoot Cruise with the Cruise Origin.