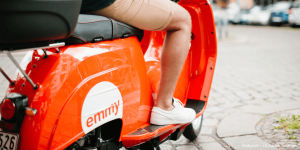 Emmy was founded in 2015 and is currently present in Berlin, Hamburg and Munich with around 3,000 sharing scooters. In addition to Bonventure, existing investors such as IBB Ventures and several German and international family offices also participated in the first financing round in two years. The fresh capital gives Emmy a tailwind after a difficult year. This is because the number of bookings, and therefore sales, plummeted due to Corona.

With the new funds, Emmy wants to procure more electric scooters, but also improve the app and the inventory scooters. The focus is to remain on Berlin, Hamburg and Munich for the time being. The company abandoned a pilot project in Vienna this year, according to a report in the German publication Gründerszene. What is certain, is that the 1,500 planned new electric scooters will not be ordered from Govecs and Niu as before, but from a third manufacturer. The corresponding model is to be unveiled in the spring.

According to Gründerszene, Emmy has coped with the impact of the healthcare crisis through a series of strategic decisions and a focus on cost-cutting. Among other things, the startup has let contracts for white-label solutions expire, it said. In Düsseldorf (Eddy) and also in Stuttgart (Stella-Sharing), the startup is acting as a system partner of the respective municipal utilities, among other things.