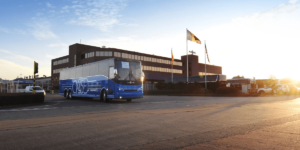 Belgian bus manufacturer Van Hool has launched sales of its battery-electric coach for the North American market that was unveiled in 2019. The first example of the Van Hool CX45E has now been shipped to the USA, with ten more CX45Es to follow in the first half of 2021.

The electric tour bus is manufactured in Koningshooikt, Belgium. Sales in North America will be handled by ABC Companies with whom Van Hool has been cooperating for decades. The shipment will take place “after an intensive development and test phase,” according to the Belgian company. The first eleven examples will be handed over to two unnamed customers in North America.

The CX45E, already announced in 2019, is an electric tour bus designed specifically for the North American market with battery technology from Proterra. The US manufacturer had only made it public in August 2019 that it intended to offer its own technologies to third parties. Depending on weather conditions and the course of the route, the CX45E is expected to travel up to 500 kilometers. The model is only meant for longer distances to a limited extent. Rather, it is to be used “primarily for transporting groups of employees between home and the workplace and for other commuter or regular passenger transport,” according to Van Hool.

On board, the CX45E has an electric motor with a continuous output of 310 kW, a peak output of 360 kW and 4,240 Nm of torque from Siemens, as well as said battery packs from Proterra with a total capacity of 676 kWh. Van Hool gives the top speed as 114 kph, and the charging power at 125 kW, resulting in a charging time of around five hours (from 5 to 95 per cent SoC). The plug type is designed for the North American market with CCS Type 1. Van Hool provides all of these technical details in the video below.

“With this announcement it all became a reality: a few years ago we put the first technical concepts of the CX45E on paper, and today the end-result leaves for the US,” CEO Filip Van Hool comments on the first sea deliveries. “Though not as prominent as in North America, in Europe too we see growing interest in a European version of the electric coach.” He says his company is doing everything it can to put itself in a starting position now with the experience gained from the development of the CX45E so that it can quickly offer customers a convincing solution as soon as interest in Europe becomes more concrete.

Van Hool has been working with ABC Bus Companies as a distributor for the North American market for more than 30 years. Around 11,000 Van Hool coaches and buses are on the road in the USA, according to the company headquarters. This presence, built up over years, also explains the Belgian company’s interest in entering the electric bus market in the US with a specially designed coach model. “After all these years of hard work, together we have managed to put Van Hool on the map in America,” says Filip Van Hool. “As there was demand from several customers for fully electrically powered vehicles, we at Van Hool and ABC Bus Companies Inc., looked for a solution.” This is now coming to market in the form of the CX45E.