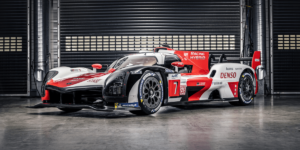 Toyota Gazoo Racing has unveiled the race car it will enter in the FIA World Endurance Championship (WEC) this year. In line with the new hypercar regulations, the GR010 Hybrid features an all-wheel drive powertrain with system power capped at 500 kW.

With the start of the 2021 season, the LMH (“Le Mans Hypercar”) class will replace the previous top class LMP1 (Le Mans Prototype 1). This will be accompanied by the introduction of a new vehicle category, namely that of the hypercars. Toyota Gazoo Racing relies on a hybrid: while a 3.5-litre twin-turbo V6 engine delivers 500 kW to the rear wheels, a 200 kW motor-generator unit developed by Aisin AW and Denso sits at the front axle. As regulations allow a maximum system power of 500 kW, intelligent electronics reduce the power according to the amount of hybrid boost used.

The GR010 Hybrid is a prototype race car and has been jointly developed over the past 18 months by engineers at the race team’s headquarters in Cologne, Germany, and hybrid electric drive experts at the Higashi-Fuji Technical Center in Japan. The striking look of the racing prototype is reminiscent of a planned road-legal offshoot that was first seen at last year’s 24 Hours of Le Mans but is currently still in development.

The new racing regulations are partly aimed at reducing the cost of racing cars. For example, the new GR010 Hybrid is 162 kilograms heavier and has 32 per cent less power than its predecessor, the TS050 Hybrid. “As part of a cost-cutting initiative incorporated in the regulations, the new GR010 HYBRID is 162kg heavier and with 32% less power than its TS050 HYBRID predecessor, with Le Mans lap times expected to be around 10secs slower. It also has bigger dimensions; it is 250mm longer, 100mm wider and 100mm higher,” Toyota Gazoo Racing writes.

In addition, for the first time there is no motor-generator unit in the rear, but an additional starter motor. In addition, fully hydraulic brakes on the rear axle are compulsory this year. Further, only one homologated bodywork package with only one adjustable aerodynamic device is permitted. “The GR010 HYBRID will therefore compete in the same specification at both low and high downforce circuits, with an adjustable rear wing modifying the aerodynamic characteristics,” says the race team.


Toyota Gazoo Racing is the reigning world champion and three-time Le Mans winner. The team will enter its ninth WEC season with the same driver line-up as in 2019/2020: Mike Conway, Kamui Kobayashi and José María López will drive the #7 GR010 Hybrid and Sébastien Buemi, Kazuki Nakajima and Brendon Hartley will sit in the #8 sister car. Nyck de Vries will remain with the team in his role as test and reserve driver.

The battle for the WEC title will be fought at six races on three continents this year. It starts with the 1,000 Miles of Sebring on 19 March, followed by the 6 Hours of Spa-Francorchamps (1 May) and the season highlight, the 24 Hours of Le Mans. These will take place from 12 to 13 June 2021. The first World Endurance Championship race since 1992 at Monza will take place on 18 July, before heading to Fuji Speedway (26 September) and then to Bahrain (26 September) for the season finale. At each of these three races, six hours have to be completed at race pace.

Due to the different vehicle concepts with which teams are allowed to compete in the hypercar class, a BoP system (Balance of Performance) will be applied for the first time in the WEC and at Le Mans. According to this system, the organisers modify the performance of each car from race to race in order to maintain as identical a performance potential as possible. In this way, the races should be as close as possible.

“It is a fascinating time for endurance racing, with the new Le Mans Hypercar class, and also for Toyota Gazoo Racing, with the launch of the GR010 Hybrid,” expressed Hisatake Murata, Team President Toyota Gazoo Racing. “Through our WEC participation, we will refine our racing hybrid powertrain in the GR010 Hybrid, enhance our understanding of hypercar technology and continually develop our staff. We do this with one clear goal: to deliver more exciting sportscars to our customers in the future. The GR010 Hybrid is a preview of our road-going cars and what we learn on the WEC race tracks will directly benefit our customers. For this reason, we are delighted to welcome new competitors to the top category of WEC; a tough fight on the track will inspire us to continuously improve and push the limits for better.”