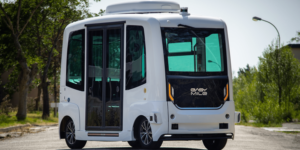 French EasyMile and Germany’s Sono Motors want to develop a self-driving shuttle powered by the sun. Based on EasyMile’s EZ10, the shuttle will bear Sono’s patented solar technology. If the concept works, it may make it to 30 countries.

This is the number of export markets that EasyMile claims to serve with the EZ10 already. For Sono Motors, the startup just presented new prototypes at CES and said they were open to licensing. EasyMile was first in line.

Sono’s solar technology works by installing solar cells into flexible polymers, not glass. This makes it lighter, robust, cheaper and more efficient than any other solar vehicle, the company claims. Simultaneously, Sono clarifies that the solar body panels cannot replace traditional charging methods but can reduce the number of charging intervals.

So for now, it remains unclear, how much more range the solar cells may give the EasyMile shuttle. The announcement said the charge time could be “dramatically shortened with the new solar technology.” At the moment, operators must plug in the EZ10 for around six hours to fully recharge from empty. The battery then lasts for up to 16 hours of slow driving.

EasyMile and Sono hope this combination will lead to a “new type of energy-efficient transportation” – which actually does not appear too far off. EasyMile has been on our radar since 2017 when their EZ10 made first rounds along the Seine in Paris. Operations have expanded since and the new partnership may help bring costs further down. The starting price is 25,000 euros at the moment.

The EZ10 sits up to six people but can accommodate for over a dozen passengers, plus a human “operator” just in case. EasyMile claims that they already run on autonomy at level 4 without a driver, meaning in a “known area” like a campus or similar environments. The autonomous vehicle has a maximum speed of 45 kph but will initially have a maximum speed of around 20 – 25 kph in regular service.

For Sono Motors, regular readers may recall the Munich-based startup and its Sion electric car with solar cells. They have been through some rough weather with clouds of bankruptcy hanging over them in late 2019. They have since recovered with a new financing concept. Only a year later, Sono said they had received around 100 million euros in capital via equity, debt and paid reservations as reported. The startup has also garnered around 12,400 pre-orders for its Sion solar electric car.

Back to today’s announcement and the new licensing strategy. Sono Motors and EasyMile pointed to buses and shuttles like the EZ10 as particularly fit for solar electrification because of the large contact area on buses and trucks and we think that may be just right.