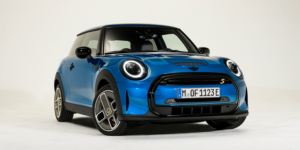 Mini is giving its 3-door, 5-door and convertible a facelift, which in the case of the 3-door also benefits the purely electric Mini Cooper SE. The drive technology remains unaffected by the refresh.

The new edition of the electric Mini Cooper SE starts in Germany at list prices from 32,500 euros. In the UK, the Electric now costs from £27,920 before applying for the £3000 government grant.

From March onwards, the Mini Cooper SE, like its siblings with combustion engines, will drive up in Germany with a reduced design language which, according to parent company BMW, brings out Mini’s unmistakable design features even more strongly. The small cars come up with fresh accents in the cockpit, new comfort options, a modern light show, and a revised control system in the interior. Also onboard is new damper technology and additional driver assistance systems.

The starting price for the Mini Cooper SE in Germany is 32,500 euros. After deducting the environmental bonus, including the manufacturer’s share (9,570 euros), the price drops to 22,930 euros. As far as the exterior is concerned, the British brand has made the characteristic radiator grille and the round headlights even more prominent by reducing them. Besides, the central bumper strip is no longer in black, but in body colour. Besides, LED headlights will be standard equipment in future, while adaptive LED headlights are optional.

Mini has long offered contrasting colours for the roof and exterior mirror caps. Now the British company is going one step further and creating roofs with colour gradients. Apart from that, the selection of body paint finishes will include new colours in future. There are also five new alloy wheel variants.

Inside, the small cars offer new interior and seat surfaces after the facelift, ambient lighting, and improvements in the areas of chassis, driver assistance systems, operation and connectivity. New is an adaptive suspension with special damping, an electric parking brake, active cruise control with Stop&Go function, an assistance system that warns of lane departure, bad weather lights and the ‘Piano Black Exterior’ package for black colour accents on the exterior. Also, there are new equipment packages for targeted individualisation of the small cars.

The drive of the Mini Cooper SE remains unchanged, as mentioned above. The electric motor onboard has an output of 135 kW and is supplied with energy from a 32.6 kWh battery. Power is transmitted via a single-speed automatic transmission. The Brits put the range at 203 to 234 kilometres according to WLTP, the power consumption at 17.6 to 15.2 kWh/100 km and the top speed at 150 km/h.