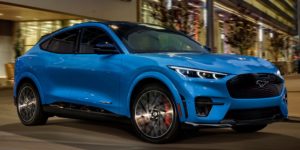 The company’s mighty electric SUV has come to market with delays. Deliveries in the US appeared close to stalling in December, so the carmaker is trying for volume elsewhere it appears. Ford hails its localised approach in China as “unprecedented” although it is of course not. Just take Tesla, whose Shanghai factory is largely successful.

At the same time, the Mustang Mach-E is, as Ford suggest, a premium product for China, especially as the Mustang Mach-E GT performance edition. The high-end vehicle will come to Europe only at the end of 2021 and, according to the latest information, will produce 358 kW – previously there was always talk of 342 kW.

The China version will be ever so slightly longer, 2.5 cm longer (4,739 instead of 4,713 mm) with an identical wheelbase. Chinese customers will get over-the-air updates and an intelligent cockpit. Ford mentions the Ford Co-Pilot360 driving assistance package and the SYNC+ smart infotainment system.

The Mach-E in China will also feature level 2+ autonomy, which enables semi-autonomous driving on highways. Cellular V2X, a communication standard for traffic networking, is also on board and Ford says they are the first automaker in China to offer C-V2X technology in production vehicles.

For the US market, Ford only recently reduced the price of the vehicle slightly. They now stand at $42,895 base and $54,700 for higher trims, equivalent to 36,300 and 46,300 euros. All Ford electric cars in the US qualify for $7,500 tax credits because Ford (unlike Tesla and GM) has sold few electric cars to date and has not yet reached the tax credit threshold. They have built no more than 7,000 units of the electric SUV so far. Ford is aiming for 50,000 vehicles per year or an average of 4,150 Mustang Mach-Es per month.

In Europe, the Mustang Mach-E is scheduled for launch shortly, but Ford has yet to set an exact date.