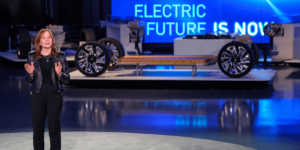 General Motors has announced that it will largely abandon the internal combustion engine by 2035. The new focus will be on ‘light-duty vehicles’; these are passenger cars and light commercial vehicles up to 3.8 tonnes, according to the US definition. Explicitly, the company wants to “eliminate tailpipe emissions” from 2035.

This is what the US company writes in a press release. This also means a rejection of hybrid drives. Moreover, this wording excludes the option left to other manufacturers in their goals for CO2 neutrality: synthetic fuels could be produced in a climate-neutral way, but still provide tailpipe emissions.

New passenger cars and light commercial vehicles from GM are, therefore, electric-only from 2035 onwards, whether with batteries or, in some segments, with hydrogen. GM wants to be completely CO2-neutral by 2040.

CEO Mary Barra alleges that 75% of General Motors’ CO2 emissions come from the vehicles’ tailpipes sold in a LinkedIn post explaining the move. The group’s announcement came a day after new US President Joe Biden signed a sweeping executive order on climate action.

It is true that General Motors had only in November 2020 sharply increased its budget for electric mobility and plans to invest 27 billion dollars in the development and production of electric cars by 2025. Nevertheless, Barra’s company still makes the majority of its sales with petrol cars and in a few markets with diesel vehicles and is still in the process of turning around their position.


As the company now reiterates in the communication on its own climate neutrality goal, it wants to offer 30 fully electric models worldwide “by the middle of the decade”. For the USA, the goal is somewhat more concrete: 40 per cent of the models offered there in 2025 are battery-electric vehicles. But at the end of March, Reuters had reported, citing internal production planning, that GM and Ford were only planning on around five per cent electric cars by 2026, despite full-bodied announcements.

However, the first model of this e-offensive will still not be on the market by the beginning of 2021, so the interim goal alone is ambitious – especially considering the problems European carmakers have had in recent years with the launch of their electric models. A big advantage for the Americans could be their own battery factory “Ultium Cells LLC” in Ohio, which GM is building together with LG Chem (today LG Energy Solutions).

By 2030, all US locations are also to be powered 100 per cent by renewable energies, and from 2035 all locations worldwide. The company wants to cover the expected remaining CO2 emissions with certificates.

To ensure that the electric cars can be operated cleanly, GM says it is working together with EVgo. By the end of 2025, the two partners want to build more than 2,700 new fast-charging stations in the USA, all of which will be powered by green electricity. This should also help to increase the acceptance of electric mobility, GM said.

“General Motors is joining governments and companies around the globe working to establish a safer, greener and better world,” Barra said, according to the statement. “We encourage others to follow suit and make a significant impact on our industry and the economy as a whole.”

Those governments, of course, include their own. US President Joe Biden last night issued an Executive Order which put the climate crisis and tackling it at the centre of all future policies and budget.

Ford to make Mustang Mach-E with Changan in China