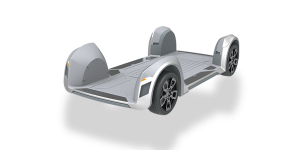 The Israeli eMobility start-up Ree Automotive moves to the US stock exchange Nasdaq through a merger with the investment company, 10X Capital Venture Acquisition Corporation. The SPAC deal is expected to bring Ree about half a billion dollars.

The Israeli start-up has developed a space-saving architecture for electric cars that is supposed to give designers more freedom to design the vehicle interior. The concept is based on accommodating all components necessary for locomotion in the wheel and wheel housing. Ree calls this approach “REEcorners”, referring to the four corners of the vehicle’s underbody.

The merger of Ree Automotive with 10X Capital is expected to be completed by the end of the first half of 2021. The combined company will trade on Nasdaq under the symbol “REE” and is valued at $3.1 billion. The capital raise of approximately $500 million comprises a $300 million private investment in public equity (“PIPE”) equity raise and $200 million in cash. The investors in the PIPE include Mahindra, Koch Strategic Platforms and Magna International. According to Ree, they will use the new funds to grow the company.


As a side note, Koch Strategic Platforms is Koch Industries’ attempt to buy into new technology, and they seem on a little shopping spree. Three days ago, they also bought into a similar merger, this time for Norway’s Freyr, a battery maker. In both cases, the merger is a SPAC deal. 10X Capital Venture Acquisition Corporation was founded precisely to merge with another company, hence the term “special-purchase acquisition company” (SPAC). With such a SPAC deal, the otherwise usual procedures of an own IPO can be accelerated enormously in the case of a merger, since the SPAC is already listed on the stock exchange. In the USA, a classic IPO can take up to two years. Several e-mobility companies, including Arrival, Faraday Future, EVgo, and Freyr, of course, are currently following the same path.

“Being the only truly horizontal player in the market today positions us to play a major role in accelerating electrification of mission-specific vehicles in multiple sectors such as delivery fleets, Mobility-as-a-Service, e-commerce retailers and new mobility players,” expresses Daniel Barel, co-founder and CEO of REE Automotive. “We are truly excited to be partnering with Hans Thomas and the 10X Capital leadership team as we begin our next chapter as a publicly listed company in our journey towards a better, cleaner and more sustainable e-Mobility future.” REE states that its “flattest EV platform in the industry” can be used to build electric or autonomous vehicles of any size and shape – from American Class 1 to Class 6.

Ree is headquartered in Tel Aviv but also operates offices in the US, UK, and Germany. Last year, the company signed an agreement with Mahindra to explore joint commercial electric vehicle development. The Indian carmaker is now also one of the investors in the IPO.