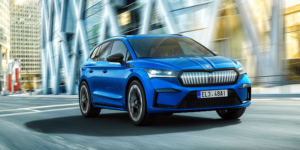 Skoda plans to offer the Sportline model variant with sporty looks and dynamic handling for the purely electric Enyaq SUV model, namely for three drive options of the Enyaq iV. The Czech Volkswagen subsidiary has not yet announced prices.

Features of the Sportline exterior are primarily black body applications, 20 or 21-inch alloy wheels, and a lowered sports suspension, as well as sports seats with integrated headrests, a three-spoke leather multifunction sports steering wheel and decorative inlays in a carbon look in the interior. The Enyaq Sportline iV also comes with full LED matrix headlights as standard. The powertrain, on the other hand, remains unaffected, with the top speed capped at 160 km/h.

Skoda presented the Enyaq iV at the beginning of September 2020, ahead of the ID.4, and started series production in November in Mladá Boleslav. The electric SUV is scheduled for delivery in the second quarter of 2021. Unlike Volkswagen, the Czechs have opted for a wider range of battery and drive versions. Skoda had already given details of the five different power variants (three with rear-wheel drive and two with all-wheel drive) and three battery sizes in May 2020, including, of course, as a central feature, the ranges, which are between 340 kilometres (Enyaq 50 iV) and 510 kilometres (Enyaq 80 iV).

Initially, only a “Founders Edition” of the Enyaq 60 iV and the Enyaq 80 iV was available (only in the metallic paint finishes Black-Magic and Arctic Silver, 21-inch rims, black exterior surrounds, in the interior the “Design Selection” called ecoSuite). Immediately after the world premiere in September, however, the Czechs put the configurator on hold. However, you won’t find the classic equipment lines. Instead, Skoda has created a construct of standard equipment depending on the battery size, so-called “Design Selections” oriented to living environments, option packages and thinned-out special equipment.

For the Sportline version, the carmaker’s designers have created their own “Design Selection” – with the above-mentioned decorative inlays in carbon look and with upholstery and roof lining predominantly in black. The seat covers are made of Suedia microfibre and feature grey piping.

The manufacturer has not yet announced prices for the Sportline variants. In the UK, prices for the Enyaq iV start from £33,450 (before £3000 PiCG) and ‘Founders’ variant costs almost £50,000. The base model will be available for order later, as will the two all-wheel-drive models.

US launch for Mercedes EQC cancelled for now