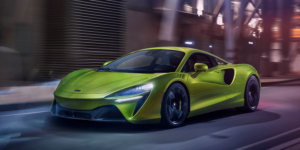 The British sports car manufacturer McLaren has presented its first production model with a plug-in hybrid drive. The super sportscar Artura combines a six-cylinder petrol engine with an electric motor – a first for the manufacturer. The McLaren Artura is already available for order, starting at 226,000 euros.


The Artura has a system output of 500 kW. The three-litre V6 with two turbochargers – until now McLaren has only used V8 engines – contributes 430 kW, the electric motor produces a maximum of 70 kW. The system torque is 720 Newton metres, with 585 Nm coming from the combustion engine, combined with a maximum of 225 Nm from the electric motor. The power is transmitted to the rear axle via a new eight-speed dual-clutch transmission.

Since the electric motor can also deliver its torque in areas where the combustion engine has not yet reached its maximum power, the hybrid drive is said to offer particularly responsive acceleration behaviour in combination. This can be done better than models with nominally more powerful engines, according to McLaren. The Artura is said to be able to accelerate to 100 kph in 3.0 seconds and reaches a maximum speed of 330 kph.

With a usable capacity of 7.4 kWh, the battery is quite small, but according to the manufacturer, it should be possible to cover 30 kilometres on a single charge. Charging is done via a Type 2 connection, which is installed above the left rear wheel. The battery is supposed to be chargeable to 80 per cent in 2.5 hours, which corresponds to a charging power of just 2 kW. The fact that the Artura starts in E-mode every time it is started shows that McLaren is serious about the electric drive and does not just want to use it as a performance boost.

The Artura is based on the McLaren Carbon Lightweight Architecture (MCLA). With its carbon fibre structure, the mid-engine sports car is supposed to weigh less than 1.5 tonnes despite the hybrid components. The Artura is built at McLaren’s headquarters in Woking, England.

“Our all-new, High-Performance Hybrid delivers all of the performance, driver engagement and dynamic excellence for which McLaren is renowned, with the additional benefit of EV driving capability,” said Mike Flewitt, CEO of McLaren Automotive. “The introduction of the Artura is a landmark moment – for McLaren, for our customers who will appreciate and enjoy this car on every emotional and rational level, and for the supercar world.”

Tesla lowers US base price of the Model 3 & Model Y