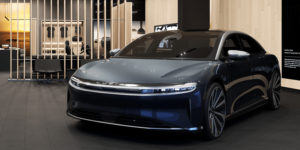 The electric car start-up Lucid Motors announced its intention to go public via a merger, confirming rumours from January. To this end, Lucid is merging with the listed investment company Churchill Capital IV (CCIV).

The IPO, which is expected to be completed in the second quarter of 2021, is expected to raise US$4.4 billion (around €3.6 billion) in fresh capital for the company, according to the announcement. A total valuation of around 24 billion dollars is expected; the equivalent of around 19.7 billion euros at the current exchange rate.

The deal itself consists of two parts: Since CCIV had raised “only” 2.1 billion dollars in its IPO, the company has too little money to buy Lucid – but that is what CCIV must do if the merged company is to remain listed. Therefore, existing Lucid investors are initially investing 2.5 billion dollars in CCIV so that the company can use this capital to take over Lucid.

There had already been rumours about an IPO through a merger in January. At the time, Bloomberg named Churchill Capital as the most likely merger partner. Churchill is a SPAC of former Citigroup manager Michael Klein. SPACs are investment firms set up precisely for the purpose of merging with another company, hence the term “special-purchase acquisition company” (SPAC). With such a SPAC deal, the otherwise usual procedures of an own IPO can be accelerated enormously in the case of a merger, since the SPAC is already listed on the stock exchange. In the USA, a classic IPO can take up to two years.

The management team around Lucid founder, CEO and CTO Peter Rawlinson will continue to lead the company after the merger. The announcement simply states that Churchill’s “leadership team and group of operating partners will actively facilitate key introductions and relationships and provide product, design, and industry insights”.


“Lucid is going public to accelerate into the next phase of our growth as we work towards the launch of our new pure-electric luxury sedan, Lucid Air, in 2021 followed by our Gravity performance luxury SUV in 2023,” Rawlinson said, according to the release. It is noticeable that Rawlinson is now only talking about the market launch of the Air in 2021; when the car was presented in September 2020, there was still specific talk of the second quarter.

According to him, the proceeds from the IPO are to flow into the expansion of the plant in Arizona, which is to be expanded in three stages over the coming years. Rawlinson mentions a capacity of up to 365,000 units per year. “Lastly, this transaction further enables the realization of our vision to supply Lucid’s advanced EV technologies to third parties such as other automotive manufacturers as well as offer energy storage solutions in the residential, commercial and utility segments,” Rawlinson adds.

No statements on possible plant in Saudi Arabia

Rawlinson does not mention a possible second plant in Saudi Arabia, which was also reported in January. The Saudi sovereign wealth fund PIF had invested in Lucid Motors in 2018. Until now, it was not known where the Saudis stood on Lucid’s stock market plans. However, since they participated in the deal or the investment in CCIV, this question has now been answered.

Churchill CEO Michael Klein justifies the partnership with Lucid in the Air’s expected impact on the EV market in the US. “CCIV believes that Lucid’s superior and proven technology backed by clear demand for a sustainable EV make Lucid a highly attractive investment for Churchill Capital Corp IV shareholders, many of whom have an increased focus on sustainability,” says Klein. Lucid will create “thousands of jobs in the US”, he adds.