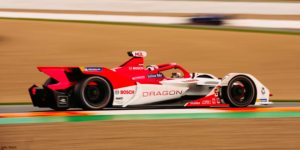 Bosch Motorsport and the Formula E team Dragon Penske Autosport have agreed to a long-term technology and development partnership. As part of the partnership, Bosch is developing a vehicle management system with hardware and software components that is specially adapted to the requirements of the Formula E car.

For season 9, when the switch to the new and more powerful Gen 3 racing cars is due, the German supplier wants to develop a complete powertrain for Dragon. Some components such as the chassis and the battery are standard parts in Formula E, as is well known. However, the electric motors, inverters, power transmission and important software can be developed by the teams or manufacturers.

Bosch hopes that its involvement will lead to a transfer of knowledge from the racetrack to electric production models – precisely the point that Audi and BMW say they have exhausted, which is why the two manufacturers are withdrawing from the electric racing series after the end of the season that is now beginning. “When optimizing the control software, we aim to always strike the right balance between energy efficiency and lap times under all track and racing conditions in order to optimally exploit the vehicle’s full potential,” says Bosch Motorsport Director Klaus Böttcher. “The extensive transfer of know-how and expertise at Bosch between volume production developments and applications for the race track helps us in this regard.”

Bosch cites the energy management functions of the MS 50.4P vehicle control system as an example of this. Here, the specified amount of energy is intelligently distributed for the fastest possible lap time. In addition, energy recovery is calculated via a complex interaction between the electric and hydraulic brakes. Not only do technical parameters have to be adjusted here, but the system also has to give the driver good feedback.

“This alliance with Bosch is providing us with additional resources, amplifying our ability to scale our engineering,” says Nicolas Mauduit, CTO of the racing team. “while giving us access to Bosch’s combination of hardware and software expertise to help us compete with the largest OEMs, in the most competitive motorsport championship.”

In Formula E season 1, Dragon Racing still managed to win one race, achieve several podium finishes and finished second in the championship – with 171 points. In subsequent years, success declined, with other teams partnering with manufacturers pulling ahead of Dragon Penske Autosport. At the end of last season, the team only finished 11th with seven points.