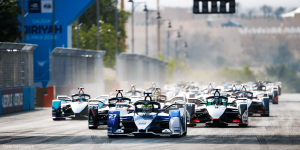 A few days after Audi, BMW has also announced its withdrawal from Formula E. They will end their involvement in the electric racing series at the end of the coming season to sharpen their focus on series production, the Munich-based company announced.

BMW emphasises that its motorsports team BMW i Andretti will compete for podium places. At the same time, Formula E has served as a technology laboratory for the series from the very beginning. The car manufacturer describes the successful technology transfer as including new findings in energy management and energy efficiency, the transfer of the software for the power electronics from racing to series production, and the improvement of the power density of the electric machine, among other things.

“When it comes to the development of e-drivetrains, BMW Group has essentially exhausted the opportunities for this form of technology transfer in the competitive environment of Formula E,” the automotive group announced. “Furthermore, the strategic focus of the BMW Group is shifting within the field of e-mobility. In the future, greater emphasis will be placed on the comprehensive scaling of the offering and global production.” As a result, the team will withdraw after the coming season, when BMW will compete with the BMW iFE.21 and the driver duo Maximilian Günther (GER) and Jake Dennis (GBR).

For Formula E, the news is the next bang for the buck after Audi announced its retirement a few days ago. The withdrawal of the Ingolstadt-based company came as a surprise: Audi recently presented the e-tron FE07 as Formula E racing car for the coming season. The special feature: For the first time, the car is powered by an Audi in-house development. “Formula E has accompanied the transformation phase at Audi,” explained Audi boss Markus Duesmann. For Duesmann, who himself worked for BMW in Formula 1 for many years, Formula E is consequently no longer the right platform; partly because of the limited technical development. In 2022, the motorsports team will instead participate in the Dakar Rally with a hybrid racing car.