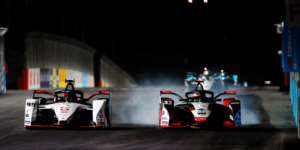 The Formula E is on again, and with the season just starting remains entirely unpredictable. The FIA World Championship’s opening races on Friday and Saturday in Diriyah, Saudi Arabia, happened at night, making for striking imagery.

The cooler nighttime did not take the heat out of the races. Mercedes-EQ’s Nyck de Vries claimed the Pole Position and the win in the season opener. A heated front-row battle between Envision Virgin Racings’s Robin Frijns and his former teammate Sam Bird, now in a Jaguar, dominated the second race. Bird prevailed under the floodlights, extending his streak of victory in all seven Formula E seasons.

Both races presented more storylines than a Christopher Nolan movie. Especially for the Wolffs, the two days must have felt like a roller coaster of emotions: Team principal of ROKiT Venturi Racing, Susie Wolff, celebrated Edo Mortaras second-place finish for Venturi on Friday. Susie’s husband, Toto Wolff, is Mercedes’ motorsport boss and was more than happy about de Vries’ maiden victory in the first race and both of his drivers scoring the fastest lap, respectively. But on day two, Venturi and Mercedes EQ had to start from the end of the grid after no qualifying time. You read right—more about that in a second.

The 2.49km Riyadh Street Circuit once again proved a difficult track with a couple of crashes during practices, qualifying, and race. The two accidents that overshadowed the weekend included Venturi’s Edoardo Mortara and Mahindra’s Alex Lynn. Both had to go through precautionary hospital checks after being involved in two separate horror crashes on Saturday. During the last free practice, Mortara accelerated straight into the barriers with a brake failure. Venturi and Mercedes EQ were not allowed to participate in the qualifying afterwards. Both teams use a Mercedes powertrain, and FIA wanted to have the matter resolved before their cars were allowed back on track. After the qualifying, Mercedes released a quick explanation on Twitter. They blamed false software parameters that have led to the fail-safe not kicking in. Usually, when one brake fails in a Formula E car, the other should kick in.

After the first two races, De Fries is leading all 24 drivers with 32 total points ahead of Sam Bird (25 points). For Round 3, the FIA Formula E World Championship will travel to Italy for the Rome E-Prix on 10 April.