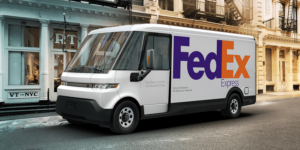 The following decade will see the phase-out of the last remaining fossil-fuelled vehicles until the FedEx fleet will only comprise electric vehicles. Vehicle electrification is only one part of the plan as the logistics giant is also looking to introduce sustainable energy across its sites and carbon sequestration. FedEx has reserved more than two billion dollars (about €1.66Bn) for the initial investment.

The latter target includes a 100-million-dollar pledge for Yale University to look into carbon removal and establish the Yale Center for Natural Carbon Capture. The initial focus is to offset greenhouse gas emissions equivalent to current airline emissions, which FedEx is addressing in their Fuel Sense initiatives designed to reduce fuel consumption in its aircraft since 2012. The new plan also includes research into alternative fuels for aircraft, but FedEx has yet to deliver details.

Back on the ground, FedEx has been trying to make concrete advances in fleet electrification for some time. An order in 2018 saw them purchase 1,000 electric vans from Chanje, a company founded by former Tesla managers. FedEx is also among the companies waiting for the Tesla Semi to arrive and holds an option for 20 electric trucks so far.

In both cases, updates have been scarce. An article in the New York Times states that Chanje had set back the timetable to deliver the first trucks in 2020. The newspaper quotes Bryan Hansel, chief executive of Chanje, saying: “2020 was a difficult year for everyone, but it put a spotlight on our industry. We expect to produce more than 5,000 vehicles in 2021, with our anchor customer, FedEx, getting the largest percentage of them. We think this number will start to move the needle and give our customers, who are desperately in need of supply, access to real-life units.”

This supply may come from sources closer to home. FedEx is the launch customer for General Motors’ electric van brand BrightDrop. FedEx Express is scheduled to receive the first EV600s in late 2021 before scaling up in 2022. GM and FedEx did not specify the numbers of units on order.

FedEx themselves tell a story of the progress in sustainable practices. “Since 2009, the company’s efforts have contributed to an approximately 40% reduction in CO2 emissions intensity across the enterprise, while package volume increased 99% during that period.”

In earlier news, FedEx Express already expressed the goal to increase vehicle efficiency by 50 per cent for its 90,000 vehicle fleet by 2025, based on a 2005 baseline. As of the fiscal year 2017, FedEx’s vehicle efficiency goal sat at close to 38 per cent. The Times also quotes the tax statement from 2019 in which FedEx said it added almost 400 electric vehicles to its international fleet that year. In total, the company runs about 100,000 delivery vehicles of various sizes.