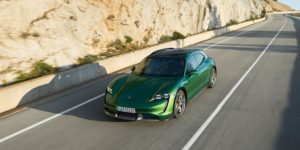 Porsche is expanding its all-electric sportscar range and has unveiled four fully electric Taycan Cross Turismo models. Like the Taycan sports saloon, the Cross Turismo always comes with a big battery option and all-wheel-drive, but with its storage space and dedicated chassis, the Turismo is more than just an offshoot. Deliveries are due to start in the summer.

At the broadcast presentation from Munich, Porsche said the Taycan Cross Turismo is the “all-rounder among electric sports cars.”  “In 2020, one in three of all vehicles we delivered in Europe had an electric powertrain,” says Porsche boss Oliver Blume. “The future belongs to electric mobility. With the Taycan Cross Turismo, we’re taking another major step in this direction.”

The German sportscar maker based in Zuffenhausen is relying on largely familiar powertrains in a new body and the Cross Turismo always features the 93.4 kWh ‘Performance Plus’ battery ex-works. While 79.2 kWh batteries are standard in some versions of the Taycan, the large battery costs extra here. Also consistently featured in all four models is the all-wheel-drive, which leads to a new drive configuration.

The Turismo has the same variants familiar from the sedan: 4S (360 kW, 420 kW in overboost), Turbo (460 kW, 500 kW in overboost) and Turbo S (460 kW, 560 kW in overboost). Since the fourth drive option on the sedan is the rear-wheel-drive model, for the Turismo here Porsche has introduced the Taycan 4 Cross Turismo, a new entry-level variant with all-wheel-drive. This model, like the rear-wheel-drive Taycan, has a power output of 280 kW, but as mentioned, it uses one engine on the front axle and one on the rear axle. Porsche also says that the possible recuperation power has been increased to up to 290 kW.

The charging system corresponds to that of the familiar saloon: an 11 kW AC charger is fitted ex-works, with a 22 kW charger available at extra cost. The DC charging power with the Performance Plus battery is up to 270 kW.

With a range of up to 456 kilometres according to WLTP, the Taycan 4 Cross Turismo is also the model with the longest range among the four new variants. That being said, the 4s and Turbo achieve similarly high WLTP values of up to 452 kilometres, only the Turbo S is slightly behind with a maximum of 419 kilometres. The power difference of 80 kW (or 70 kW in overboost) results in a very similar range, but different driving performance: With 5.1 seconds to 100 km/h and a top speed of 220 km/h, the Turbo S lags behind the 4S here, which comes in at 4.1 seconds and 240 km/h. The two Turbo models have a maximum speed of 250 km/h, the Turbo S reaches 100 km/h in 2.9 seconds.

When looking at the range figures, you can see that the spread for the Taycan 4 Cross Turismo is very large with Porsche giving a range of 389-456 kilometres. This is simply because of the equipment. All variants are equipped ex-works with adaptive air suspension, which lowers the car aerodynamically at higher speeds. With the optional off-road package ground clearance increases by 30 millimetres. This should make the Cross Turismo easier to drive off paved roads but comes at the expense of aerodynamic drag.

Another new feature is the standard ‘Gravel Mode’. In this mode, the ground clearance is increased with accordingly adjusted suspension, traction control, torque vectoring and rear axle transmission. In this driving mode, the Cross Turismo responds differently to the throttle. Porsche says that the accelerator pedal characteristic curve has also been specially designed for off-road use in terms of power delivery.


Visually, the Taycan Cross Turismo closely follows the Mission E Cross Turismo concept study presented at the 2018 Geneva Motor Show, except that the study’s rather extreme plastic cladding and the additional lights integrated into the front bonnet did not make it into series production. What remains from that study is the Taycan Cross Turismo’s wheel arch trims, independent front and rear lower sections and side skirts. With the Off-Road package, special flaps are also fitted to the corners of the front and rear bumpers and to the ends of the sills. These are designed to protect against stone chips – and contribute to the striking appearance.

The electric off-road estate is 4.97 metres long with a wheelbase of 2.90 metres. Porsche gives a width of 1.967 metres, with exterior mirrors it is 2.144 metres. According to the data sheet, the height is 1.41 metres, which can vary with the air suspension.

According to series manager Stefan Weckbach, the Taycan Cross Turismo should convince buyers with the combination of the “uncompromising dynamics of the Taycan”, its transport capacity and the fact that it does not necessarily need asphalted roads to make rapid progress. “Initial feedback from the markets suggests that the Cross Turismo is even better received than the Taycan in some places,” says Weckbach. “In Norway, for example, we suspect that customers will opt for our CUV 70 per cent of the time in the future.”

The Turismo’s transport capacity is indeed significantly higher than that of the sedan, but not at the level of many an e-SUV. In the 4 and 4S, it’s between 446 and 1,212 litres. In comparison, the Taycan 4S it is 366 litres. In the two Turbo variants, the load volume is slightly lower at 405 to 1,171 litres. The frunk holds 81 litres.

There is no trailer coupling in the Taycan Cross Turismo. Those who want to load the car beyond the 1,200-litre volume (or only the standard boot is available due to passengers) can order a specially developed roof box, which is approved for up to 200 km/h. In addition, Porsche itself has developed a bicycle carrier that can hold up to three bicycles. According to Weckbach, the decision in favour of the company’s own bicycle carrier was made simply because no suitable system could be found on the market. Even when fully loaded, it should still be possible to open the tailgate with the bike rack mounted.

In the Cross Turismo, Porsche also offers some ‘Functions on Demand’ (FoD), which means drivers can buy various comfort and assistance functions as needed. These are activated online and can be used without a visit to the workshop. According to Porsche, this is possible with the functions Porsche Intelligent Range Manager (PIRM), Power Steering Plus, Active Lane Guidance and Porsche InnoDrive.

The Taycan Cross Turismo is to be delivered from this summer onwards. In Germany, prices start at 93,635 euros. The basic sedan with the 93.4 kWh battery is a good 4,400 euros cheaper at 89,244 euros, but while this only has one engine, it also has a higher range. Porsche has not yet released the prices for the other versions and the surcharge options mentioned, such as the bicycle rack or the off-road package.

with reporting by Sebastian Schaal