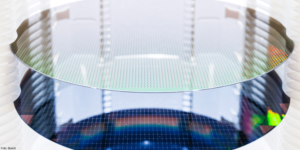 In its new semiconductor plant in Dresden, Bosch has produced silicon wafers in a fully automated process for the first time. The successful test run is considered a decisive step towards the start of production, which the company plans for the end of 2021.

Construction of the completely digitalised and highly networked semiconductor factory began in 2018 and will primarily be used to build microchips for cars in the future. The first wafers have been going through production in Dresden since the end of January 2021. Bosch uses these wafer-thin silicon plates to manufacture power semiconductors that will later be used, for example, in DC/DC converters in electric and hybrid vehicles.

“Chips for tomorrow’s mobility solutions and greater safety on our roads will soon be produced in Dresden,” says Harald Kröger, member of the board of management of Robert Bosch GmbH. Bosch plans the official opening for June 2021, with series production to start at the end of 2021.

The Bosch factory in Dresden is more advanced than the existing Bosch semiconductor factory in Reutlingen. In Dresden, the new building will use 300-millimetre-diameter boards instead of the usual 150- or 200-millimetre technology. This means that up to 31,000 individual chips will fit on one wafer. The company hopes this will lead to higher economies of scale and strengthen its competitiveness.

The production itself is complex and lengthy. According to Bosch, the wafers spend six weeks in production and go through around 250 steps. Prototype production started at the end of January and has now been completed. In the next step, semiconductors with “highly complex integrated circuits” will be manufactured from these wafers. The company says that a run will take more than ten weeks and involve around 700 process steps. Bosch plans to start such a test run in March, which would mean that production of these components would be completed by the end of May or the beginning of June.

The plant, in which Bosch is investing around one billion euros, will not only be home to 300-millimetre technology but also to automation and networking. The exchange of data between the machines in real-time is supposed to make production particularly efficient. “Our new semiconductor factory sets standards in automation, digitalisation and networking,” says Kröger.