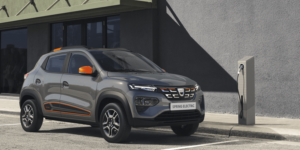 Dacia will open the first pre-orders for its Spring electric model on 20 March. Now the Renault subsidiary brand has given more details on the production model as well as first prices. The private customer model is to start in France at list prices from 16,990 euros.

As announced at the launch of the Spring last year, there will be three versions of the electric Dacia. The aforementioned private customer model is available for pre-order from 20 March and is scheduled for delivery from autumn 2021. The basic ‘Confort’ version includes a manual Kilma system, a Bluetooth radio and a Mode 2 charging cable for power sockets. A Mode 3 cable for public charging stations costs 250 euros extra. The base colour is white, the three metallic paint finishes cost 500 euros more.

The model called ‘Confort Plus’ for 18,490 euros (in France) includes a seven-inch navigation system with smartphone connectivity, a different interior and one of the three metallic paint finishes. The spare wheel, which costs an additional 180 euros for ‘Confort’, is also included here. The customer also has to pay an extra 250 euros for the Mode 3 charging cable. The CCS option with 30 kW charging power costs 600 euros extra; it is not available on the base model.

There is also a business version for car-sharing and business customers. This version is priced at 16,800 euros in France, according to the current announcement. The business model is only available with one equipment. Basically, the standard equipment is similar to the private customer model, but here the preparation for car-sharing and four floor mats are always included. All other features of the private customer version are available here as extras – i.e. the navigation system in the ‘Techno Pack’ (450 euros), the spare wheel (180 euros), the Mode 3 cable (250 euros) and the CCS option (600 euros).


The business model is to be used, among other things, in Renault’s own car-sharing scheme Zity. But Dacia has also already received an order for 3,000 vehicles from the electric car-sharing services Leclerc. This version should be available as early as March, according to Dacia.

The third version is the Cargo model, which is said to offer up to 1,100 litres of cargo volume – instead of the 300 litres or 600 litres with the rear seatbacks folded down of the other two models. At the time of the announcement, a cargo volume of 800 litres was mentioned. The payload is to be 325 kilograms. As this version, which is approved in the N1 class, is not to be available until the beginning of 2022, Dacia has not yet communicated any prices here.

The Spring is 3.73 metres long, 1.62 metres wide and 1.49 metres high. The wheelbase of 2.42 metres should also provide enough space for larger passengers. The Spring can charge with up to 6.6 kW AC. With a 3.7 kW wall box, the charging time is less than eight hours, at 7.4 kW or more it is five hours. A 30 kW DC charger is also to be available as an option, but the charging power will not be available over the entire charging process in view of the battery size: Dacia speaks in the announcement of “less than one hour to 80 per cent”.

The Dacia Spring is known to be an adaptation of the Renault City K-ZE model sold in China, where it has been on sale since September 2019. Prices for other European nations are not yet known. As soon as they are available, the article will be updated to reflect that.

Artemis rumoured to be six months behind schedule