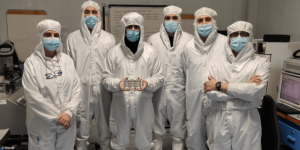 Fraunhofer IZM and the Italian automotive supplier Marelli have developed a power module for electrified traction applications in motorsport. The all-silicon carbide-based module, called EDI, is said to enable higher conversion efficiencies and to be smaller and lighter.

The Fraunhofer Institute for Reliability and Microintegration IZM says the name EDI stands for ‘Enhanced Direct-cooling Inverter’ and that the module was suitable for “high-performance electric drives”. Simultaneously, the partners say the technology will probably also find its way into road vehicles later on. “At Marelli Motorsport, our mission is to promote technological advances that can make the difference above all on the racetrack while enabling next-generation technologies for the road vehicles of tomorrow,” says Riccardo De Filippi, Senior Vice President and CEO of Marelli Motorsport.

The use of silicon carbide (SiC) is not a novelty in itself; suppliers such as ZF or Delphi also use SiC semiconductors in 800-volt components for production cars. Silicon carbide enables faster and more efficient circuits compared to semiconductors based on pure silicon.

The most innovative aspect of the Marelli-Fraunhofer development is that it does not require a base plate thanks to an “innovative structural design”, which is said to “drastically reduce” the thermal resistance between the SiC components and the cooling fluid. The partners say that the result is an extremely compact power stage that can take advantage of the efficiency benefits of silicon carbide and allow for more flexibility in packaging and cooling systems in terms of design.

Fraunhofer IZM says that compared to other silicon-based structures of the same power, the new technology enables a conversion efficiency of up to 99.5 per cent, reduces weight and size by half and has 50 per cent higher heat dissipation into the cooling system.

The EDI is currently being manufactured in a cleanroom at the Marelli plant in Corbetta, Italy. According to Fraunhofer IZM, the component has already undergone a series of reliability tests for motorsport application profiles. Whether and when Marelli is planning such a SiC power module for road vehicles is not yet clear.

At the end of November 2020, Marelli announced its intention to assemble electric drives in Cologne from 2021. In Cologne-Niehl, not far from the Ford plants, a production line for electric drives is to be installed on 18,000 square metres in the first half of the year. The Marelli Group was only formed in 2019 from the merger of the Italian supplier Magneti-Marelli (that used to belong to Fiat-Chrysler) and the Japanese company Calsonic Kansei (with roots in Nissan).