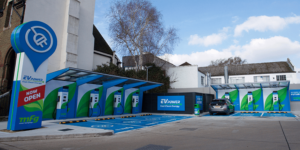 The British petrol station operator Motor Fuel Group (MFG) has announced investments of 400 million pounds to install fast-charging points at around 500 locations by 2030.

The budget of around 464 million euros will finance the installation and operation of a total of 2,800 high-power EV chargers (HPC) with 150 kW and 350 kW power. Between four and eight charging points are to be installed at each location.

MFG says that, for the time being, these will mainly be 150 kW chargers, but that the share of 350 kW charging points will be increased only with the further spread of corresponding vehicles. Regarding the 350 kW chargers, the company says “While these charging speeds are beyond the capability of most EV models currently on the market, MFG is investing ahead of the curve to build driver’s confidence in electricity as a fuel source.” Businesses using commercial vehicles complain (as seen in the EV100 report for 2020 and previous years) that there are not enough larger electric commercial vehicles to suit their needs. The same can be said of charging infrastructure – namely powerful enough charging points such as 350 kW. The petrol station operator did not give further information on when and how the 350 kW chargers are supposed to be rolled out or whether these will also be catering for commercial vehicles in terms of charging power and available space at charging stations. Such preparation is being undertaken by the GoFast project in Switzerland, for example.

The first 200 150 kW chargers are to be installed at 40 locations this year. The initial focus will be on “important trunk roads and urban areas”. From 2022, at least 50 charging stations per year are to be built. By 2035, all “suitable” locations for electric cars should then have charging hubs.

MFG says it will finance, build and operate the charging hubs at its filling stations itself, so there are no plans to cooperate with established charging point operators (CPO). Instead, the company wants to become a CPO itself.

“Our planned £400 million investment in this vital infrastructure will help keep UK motorists on the move and our essential retail will support local communities and the economy,” said William Bannister, CEO of MFG.

In addition to the charging stations, the company says it plans to invest more than £50 million (€58 million) in its sites this year to expand its valeting shopping offer and food-to-go business. Partnerships with logistics companies will also be made more extensive, especially with providers such as Amazon, InPost and ByBox.

The petrol station operator says that, although this investment significantly increases the practicality of running electric vehicles, they will continue a “duel fuel strategy” meaning they will continue to provide fossil fuels for consumers. This is because, although the new registration of fossil fuel cars will not be possible in the UK beyond 2030, cars are usually around 14 years old before they are scrapped. This means fossil fuel infrastructure will still be required till at least 2043, unless carmakers stop producing fossil-fuelled cars across the board before then, which will shorten this time gap.