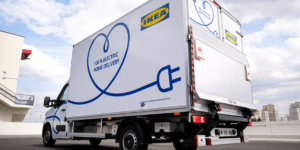 Today the EV100 initiative from the Climate Group published their annual ‘EV100 Progress and Insights Report’ showing an exponential uptake of EVs in fleets and an unprecedented roll-out of charging infrastructure.

We talked to Sandra Roling, who heads the EV100 at the Climate Group, about the challenges still facing EV100 members and some of the strategic solutions currently being utilised to address these.

The EV100 initiative was founded in 2017 by the Climate Group and 10 corporations, including big players such as Deutsche Post DHL, Vattenfall, Baidu, Ikea and LeasePlan. These member companies wanted to send a strong market message by pledging to decarbonise their fleets by 2030.

In 2020, the initiative saw its membership rise to more than 100 in an increasingly lively market. We asked Sandra Roling about their findings and what kind of activity is still needed at a time when large automotive companies and manufacturers are (finally) getting the picture about the necessity of an electric drive train.

The year 2020 was indeed an exceptionally busy year. The number of EVs deployed by EV100 members has more than doubled, to over 169,000, up from 80,000 in 2019. The ‘EV100 Progress and Insights Report’ includes data from 101 major global businesses such as Siemens, Sky and AstraZeneca, Flipkart and Ikea, with members across five continents, covering 80 markets. The number of vehicles covered by EV100 forward-looking pledges expanded to over 4.7 million in 2020.

There has been “a boom,” says EV100, in planned charging infrastructure this year, with members reserving 6,500 locations to have charging installed, which is a 103% increase on last year. There has also been an 84% increase in the number of locations with charging already installed, to nearly 2,100 (up 11%). The number of individual charge points installed has increased by 79% to nearly 16,900 on the latest count. The top markets taking this approach were the UK, Japan, and the USA. The new focus on charging is also reflected in Iberdrola joining EV100 in 2020.

With this dynamic change in the landscape, EV100 also observes that businesses in this initiative are not just changing their fleets but are using also utilizing their property portfolios – their offices and stores – to build charging infrastructure. At the same time, this also illustrates the fact that companies still can’t entirely rely on public charging to support a fleet. And indeed, 67% of EV100 members reported a lack of charging infrastructure as the most significant barrier to fleet electrification.

Companies wanting to decarbonise with little external supportive infrastructure, in particular, are sometimes left on their own with higher outlay costs. Sandra Roling says “that’s becoming a bigger topic” that EV100 can help address. She adds that it was and still is “often up to the first movers to  build out their own infrastructure.” It is not insignificant that EV100 founding members included companies like Deutsche Post DHL or Ikea with large fleet infrastructures, budgets and depot space.

For the situation today, Roling points to new members with innovative strategies such as the scooter-sharing giant Bounce from India who is solving problems with aggregation models by asking how to best bundle demand, both on the vehicles and charging. Rolins says here “one of the areas they’re looking at is industrial parks, where obviously you would have a lot of the users together.” An approach EV100 sees as being a leading example. Bounce also led the way in established 100 battery swapping stations and are now collaborating with OEMs to make their swapping stations accessible to the general public as well as delivery or fleet operators.

Here EV100 is raising questions among members about joint investment in charging and electricity supply systems, and that this is especially useful when talking about industrial parks with shared investment. This is especially relevant for businesses using commercial vehicles:

Commercial vehicles have been a key topic for years, and especially their (low) availability. Back in 2019 we spoke to Roling about this segment and she was already calling for more commercial vehicle options. Although she says there has been rapid improvement in this area, the lack of vehicles and infrastructure remains an issue: “We need more vehicles with more options – the demand is there.” The report shows that the majority of EV100 members say that the availability of commercial vans (61%) and heavy-duty vehicles (53%) is their biggest hurdle. In a number of leading cases, companies themselves have been very proactive about demanding the required vehicle types.

The report also illustrates that there have been “significant advances” from EV100 members over the last year, with a 23% increase in the number of electric commercial vehicles from last year, including more than a three-fold increase in the electric medium to heavy-duty vehicles, that is 3.5t – 7.5t e-trucks.

At the same time, larger freight electric vehicles remain a rarity compared to smaller commercial vehicle segments and hydrogen fuel cell trucks are only just emerging. Zero-emission options are gradually rolling out, but not fast enough for businesses wanting to decarbonise their commercial vehicle fleets. EV100 highlights the strategy adopted by IKEA Retail (Ingka Group), with a target to achieve zero-emission deliveries globally by 2025. Now, with greater acceptance of the inevitability of electrification among vehicle makers, Ikea was able to co-create fit-for-purpose vehicles themselves and found collaboration partners in OEMs Renault and MAN. The collaboration quickly produced tailored and purpose-built vehicles. Ikea now has other collaborations in the pipeline, with tests for heavier duty trucks underway.

But with manufacturers now onboard, where does EV100 come in? Sandra Rolins agrees that “Corporate uptake of electric vehicles is on a roll.” With this surge of interest, the key for companies is now collaboration. This is especially important for those requiring vehicles and infrastructure catering to vehicles on either side of electric cars, as both Ikea and Bounce, among others have shown. This kind of collaboration is now more possible since more stakeholders are interested in these kinds of conversations.

On this front, EV100 is assisting the freight sector with targeted communication specifically regarding collaboration in the freight sector. Here EV100 has initiated the ZEFV ACTion Group that EV100 co-organised with TDA and Calstart last year. The group runs a documented dialogue series (also linked in the EV100 report, of course) the anacronym stands for ‘zero-emission freight vehicle action group’, which is about “different stakeholders looking at these challenges and working together,” explains Roling.

At the same time, other segments are flourishing with electric vehicles or pledging to do so. EV100 saw some fairly spectacular transition activity on the corporate fleet and leasing vehicle front. Here, the top markets for corporate fleet deployment were Germany, Switzerland, and France. When it came to pledges made, the UK overtook these three countries.

A spectacular commitment was made by Lyft. In 2020, EV100 welcomed Lyft as a member, one of two in the transport network segment (TNC) next to Bounce. The Uber rival has made a commitment to reach 100% electric vehicles on its platform by 2030 which involves an estimated two million vehicles. This is the biggest vehicle-related commitment made under EV100 to date. (Uber wants to reach the same goal in 2040 and recently joined new lobby organisation ZETA to advocate for EV-only sales in the US from 2030.)

The importance of advocacy has also become clear, not just to EV100, but to industrial and business partners across zero-emission transport industries. Here, the EV100 report shows just how much has moved forward in England, also thanks also to collaborative lobby work that saw EV100 join forces with BT’s Electric Fleet Coalition. In 2020, UK companies Fleet Alliance, Ogilvie and Tusker joined the initiative. Between them, they have committed to switching over 70,000 vehicles to EVs by 2030.

While these pledges are forward-looking, Roling sees great potential in leasing companies “because they work towards a long-term vision and they have a lot of impact in terms of educating customers, and leasing companies are able to purchase vehicles in bulk.” When Leaseplan first joined EV100, it not only committed to transitioning its own employee fleet to electric by 2021, but also to targeting net zero emissions from its entire 1.8 million vehicle customer fleet by 2030.

The optimism shown by Leaseplan was greatly supported by the positive results from offering clients EVs to try out. After the first year of offering clients EV pilot projects ahead of permanently making the switch, Leaseplan saw registrations of battery EVs in its customer fleet grow by 77% in the countries where the trial took place. Most customers also went on to permanently incorporate EVs in their fleets. Rolins emphasises the fact that “This shows a clear business case – leasing companies want to provide the cars people want to drive, and people want to drive EVs. It also demonstrates the power leasing companies have over influencing the uptake of EVs by their customers”

It turns out, the learning goes both ways, especially if it comes to client communications and the right kinds of packages for various customer requirements. Roling observes: “There’s a big gap right now between companies offering packages where the customer can say: ‘I talked to my leasing company, they know what to do, they can help me do the analysis and there’s a whole one-stop-shop package,’ versus: ‘I asked my leasing company (about electric vehicles) and they told me forget about it.” Again she sees further work to be done in connecting and communicating these requirements and points to EV100 having seen increased collaboration and networking between members.

Also regarding collaborative efforts, governments guidelines and incentives for companies have been particularly effective as the report illustrates. EV100 has been instrumental in increased uptake in England. This also reflects a wider movement globally.

The EV100 report again points to the success with regard to England where government policies were formed in response to concerted collaborated pressure, not only from citizen groups but from businesses and industry. Roling explains: “That’s where this EV100 dialogue series comes in, where we’ve been able to work together with the other partners.” Partners reach from manufacturers to said policymakers but also investors as only together they can make it happen.

Sandra Roling concludes: “Ultimately, for me, it’s about building out a new ecosystem. That’s also about joint planning and thinking about priorities that ideally involves multiple stakeholders at the same time. That obviously positively impacts the investment cost as well. You can share the benefits and you can also share the learnings. This stage is also still about trying something out and sharing the learnings and then being able to scale up from there.”

The results of this report raise further questions for the transport industry and governments across the globe: As fleets decarbonise at this exponential rate, what kind of collaboration and regulation is required to ensure that vehicle-makers and infrastructure providers can keep up with the foreseeable surge in demand for zero-emission vehicles? How can this be most effectively implemented with only gradually-available and sometimes-finite resources?